When we launched January’s Pick of the Month, we noted that the poems were extraordinary and they truly are. But ‘Realisation about a friend’ by Alexandra Corrin-Tachibana tops the list in this case. Voters admired its simplicity and its beauty and loved the image that it conjured. This was a subtle poem of ‘impact and power’!

Alexandra lived in Japan for 10 years. She holds an MA in Writing Poetry from Newcastle University, was shortlisted for the Fish Publishing Prize 2018, and read at the American Writer’s Program Conference, in Portland Oregon this year.

Realisation about a friend

slowly
and deliberately
you draw
information out of me

I love it…on the surface it’s beautifully straightforward but then it leaves you extremely intrigued and wanting to know more. Also you know exactly what the author means..it has a wonderful universality. We have all felt like that

The words really meant something to me.

This poem really spoke to me. So clever, to get to the heart of a feeling, so directly.

short; to the point; succint.

Such a lot of insight and history in such a small space.

It’s a great piece of work.

It conjures up such a vivid image. Short and clever

THE REST OF THE JANUARY PICK OF THE MONTH SHORTLIST

There’s a doll’s house-sized grief
when I read a book and add a character
to my list of favourite names,
then remember that I’ll never need it now.
I’m as eggless as a vegan cooked breakfast,
I’m a photocopier out of toner,
my tubes are jestered with the effort
of forcing out the last centimetre of toothpaste.
When I went for a smear, the nurse confirmed
it’s a perishing hot water bottle down there.

The celebrities who die on the News at Ten
are no longer Brylcreemed and black and white.
Increasingly aware of the direction of travel,
I’m on the last train out of here,
already at Clapham North, I’ll never see
Charing Cross again and outside the window
there’s just my own reflection and then the black.

Melanie Branton has two collections: Can You See Where I’m Coming From? (Burning Eye, 2018) and My Cloth-Eared Heart (Oversteps, 2017). Her work has been published in journals including Ink, Sweat & Tears, Bare Fiction and London Grip. melaniebranton.wordpress.com

The Crossing by Chin Li

Isn’t it too late?
I couldn’t help asking myself
time and again. It was too late:
the sun was gone, my chance
had left; there was only one way,
and I’d have no say.

I washed my hands in the stream
and warmed them with my breath;
I saw the water evaporate, and
in the cold the hands turned red.
Then I saw my shadow
on the other side, and knew
I’d left it behind. I must sew
the button back on, I told myself.
But there wasn’t time.

The ferryman said,
How did you manage to do this,
considering, you’ve never done
an apprenticeship?
How, indeed, did I get on
this track, without teacher or help?
So I turned to face him, and,
feeling embarrassed,
whispered but a few words:
“Serendipity took pity on me.”
Waiting for me to continue, he frowned,
and then, knowing I’d run out of words,
raised his left hand.
I bowed, with deep gratitude,
and acquiesced in his plan.

Chin Li’s work is published in Confluence, Glasgow Review of Books, Gnommero, Gutter, Ink Sweat & Tears, Litro and MAP. His audio short story, “The Feather and the Hand”, was broadcast by the Glasgow-based art radio station Radiophrenia on 20 May 2019 (www.radiophrenia.scot).

Morning has broken by Dave Stacey

Please bear with me
one tiny moment
while I try to explain:

listen: a speck
of a half-fledged
sparrow doesn’t sit

his half-formed song
for all he is worth,
which isn’t that much,

at the breaking
of this overcast day,
this turning of the Earth,

this faint sensation
of warmth,
for no good reason.

Dave Stacey is based in London. His poems have recently appeared in Gyroscope Review, The Cabinet of Heed, Bonnie’s Crew, Dodging The Rain, Eye Flash and Picaroon Poetry.

January’s a recent graduate: cheap suit,
polyester or nylon, some shiny fabric.
New to the team. Golden handshake.
Keen to get its teeth into something.
Loads of ideas how to improve things,
make the place run more smoothly.
Has an eye on margins, cutting costs,
talks up efficiency gains, performance.
But its gung-ho attitude won’t wash –
they’ll have none of it. Oh, bugger off!

Prepped, it frisbees suggestions across
the meeting room, oozes business gurus
and management philosophy. It’s big
on case studies, the latest TED talk but
stinks of shaving gel, too much roll-on.
They roll their eyes as it goes to speak.
When it has fucked up, been bollocked
by the boss, and they’ve all watched
through the glass, some coax it out for
a pint, get it pissed, deal with it properly.

Paul Stephenson has published three pamphlets: Those People (Smith/Doorstop, 2015), The Days that Followed Paris (HappenStance, 2016) and Selfie with Waterlilies (Paper Swans Press, 2017). He co-curated Poetry in Aldeburgh in 2018-19 and interviews poets at paulstep.com. 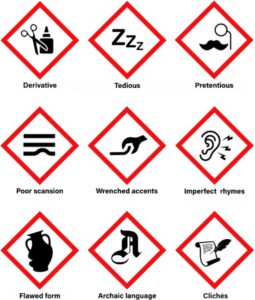 Rob Stuart’s poems, visual poems and short stories have been published in magazines, newspapers and webzines all over the world. He has also written the screenplays for several award-winning and internationally exhibited short films. His website can be found at www.robstuart.co.uk.