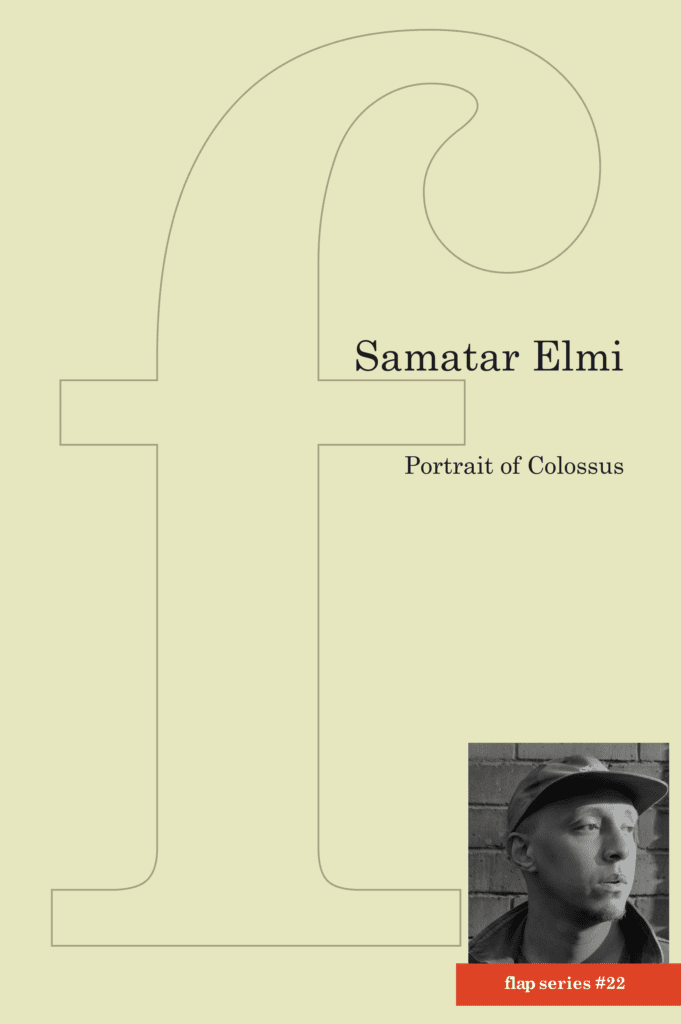 From the first poem of Samatar Elmi’s debut pamphlet, we know that this Colossus is also imagined as an immigrant: ‘fixed in stride across wandering oceans, / a bridge’. It sets the tone for the confidence and range of reference of Elmi’s voice throughout, and lets us know that this is a poet for whom the classical and the contemporary are very near of kin.

Elmi’s aesthetic is immersed in the distinct and the plural. The intense, vivid, at times cacophonous specificities of place, person and language are exactly what give this pamphlet its music. In ‘The Invaders’ the details arrive in rhythmically energised volleys (‘I am parrot’s feather, pennywort… the susurrus of grey squirrels… I am a London gang of parakeet’) and history itself, in all its polyvocality, is harnessed to rebut to the ignorant xenophobia of those who dream of an England ‘reconquered for the English’.

These poems use London’s streets as an alchemical crucible; vibrancy bubbles up through alienation, and a tone is created that is both weary and triumphant, nostalgia pregnant with the promise of regeneration. Out of the bric-a-brac of cultures, peoples and songs stuffed together in the streets of the Metropolis there is a hope, as he puts it in ‘Orpheus as a Busker’, that ‘Zeus / will reappear and end the moratorium on magic… make us all believe again’.
This kind of catholic approach is intoxicating for someone like me, but it also entails necessary erasures; Elmi can never quite manage the ‘trick of being everywhere at once’ that he sees in the Colossus bestriding the world. In many ways this is a sacrifice worth making, since, ‘at such heights all language is a blur / people as indistinguishable as fields of corn’, but it also creates spaces where the persona risks becoming lost in an alien landscape.

As a result, a powerful consciousness of being in diaspora also suffuses these poems, so much so that one of them is even called ‘Diaspora’ and expresses precisely that impossible wish for ‘a language of infinite translation’. The exploratory character of much of the language and the persona’s sense of adventure can function as a kind of corrective, a way of being ‘at home’ even in a wandering state. In ‘England’, the persona offers this sense of on-the-ground detail, ‘the names of trees I camped beside’, as a substitute for ‘detailed taxonomy’.

All the same, the legacy of racist violence which lies behind this scattering can never be forgotten. In ‘Diaspora’, the poetic plea to ‘help us reach beyond our confines / like the wind that ripped us from the maple’ captures this bitter dialectic brilliantly. As another poem, ‘Khat House’ puts it, ‘[w]e all agree that the West is a fire; warm, vital, fatal’.

The inability to build bridges everywhere and the tragedy of what can be lost underpins the pamphlet. The spectre of oblivion, usually in the form of some burning intoxicant, hangs over the poems like a pall of smoke, in the ‘quiet glow of khat leaves’ among the gathered elders in ‘Khat House’ or in the ‘controlled demolition’ of an unnamed man silently chain-smoking through ‘Manhood’.

The final poem, ‘Your Mother is in a Different Language’, dramatizes this with wrenching precision. The persona’s mother, a Somali speaker whose son acts as an English translator even at school parents’ evenings, eventually ends up seeing her son across a courtroom, on one side of ‘an unbridgeable gulf’, simply repeating the question ‘hooyo, hooyo, maxaad samaysay?’ (‘my son, my son, what have you done?’), which the persona, now as much English as Somali, knows he cannot answer ‘in a language she understands’.

Bookending the pamphlet in this way, between a Wonder of the World which no longer exists and a mother’s plaintive question to a son rapidly moving away from her, gives it a distinctly melancholic edge. As you finish you get the impression that Elmi, both the persona and the poet, has succeeded magnificently in carving out his own path forward. But like any truly perceptive artist he also has a piercing, painful awareness of what he has left behind in doing so.

Tim Kiely is a criminal barrister and poet based in London. His debut poetry pamphlet, ‘Hymn to the Smoke’, is published by Indigo Dreams.