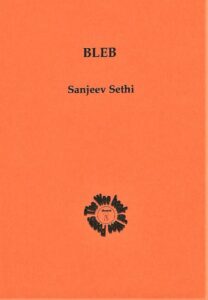 In just 31 wee poems of 10 lines each, Sanjeev Sethi, an Indian poet, creates a monumental work of grace from raw feelings. The themes are all too familiar, but the little chambers they reside in are unique. Heavy furniture goes out of the window as rooms are filled with whiffs of floating verses. Sethi creates candy floss images of love from leaden words.

The title poem ‘Bleb’ sets the tone when it says “Dialectics and dogmas:fountainhead/of misguided miseries in mind, even/ as skin craves skin, you and I, next/ to each other empty of evanescent/ safeguards. The arrogance of touch/ nudges me to notice my littleness / smallness of search.” Heavy handed theories and realization of man’s littleness  come face to face in this context.  Throughout the collection, he maintains this ‘smallness’ with utmost prudence.

Sethi is very particular about the precision of his words in describing relationships. The idea is that even default settings are to be maintained with precision. ‘Happiness’ is described as naturalizing “ the self with sorrow” or expressing “glee at seeing/ a gas balloon wave at me.”  He lets others burden themselves with problems of ownership of nature. “Others own the sky and sulk.”  Not him.

These tiny gems cut to perfection show us that Sethi is creating a world which others take reams to describe. They are so shockingly short. For instance, in ‘Remembrance’, he comes up with – “ In this hubbub, I meet myself /the most. Others are adventitious. When they/ cross my curve; I peg them on a pedestal.” This is how he nails them to be free of them. He is wary of squabbling  thoughts. “Each/story is carved with a solipsistic edge even as/angles debate and offer contrary designs.” He is not interested in them.

In ‘Momento Mori’, he says “Ill-lighted/rooms caution me of you/When their consciousness/ darkles, I am smug as a bug.” His position of comfort is determined by himself in this world. He is aware of it as a certain condition of his life. He says, “Unloved, I lived with lies and more/ lies. Feelers from divinity came by/ I grew in their denseness.” Here, he turns the divinities away as his joy is in the meticulous nature of his work.

What is the nature of his work then? In ‘Nonfiction’, he postulates “Google and other griefs/ chase my working hours/ Nights are cut out for/ graphology.”  No doubt, he is a poet and he has an opinion. In ‘Rupture’, he identifies the ailment , “As poets, we compounded the causatum.”  But, how do relationships survive then?  He says, “sometimes abbreviated/ intimacies live like this.”  “Tributaries of love/ cruise through/ the testimonials/ of intrigue and intimacy.”

How does he love then? He clarifies, “verbs within me/ are smitten by your nouns/ our grammar funnels/ greater fluidity by streaming/ new regimes of oneness.” This is what challenges him in this labyrinth of tiny words. Love, cut like a diamond,  from verbs and nouns linked in fluid grammar.

Ra Sh is an Indian English poet with three collections of poetry and a chapbook to his credit. His poems regularly appear in online journals and print anthologies. He is also a translator tranlsating to and from his mother tongue Malayalam.