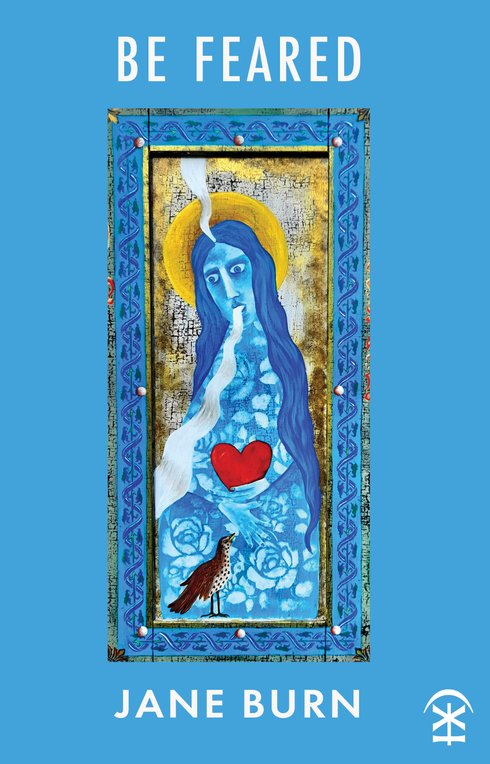 Living in such a digital age, it is increasingly rare to not at least know something about a writer even before we read their work. I wanted to try to approach this collection by Jane Burn as if I was in a vacuum, unaware of what I know of her from social media and the like. I didn’t want to be influenced in any way and to read the poems and appreciate them as linguistic entities free from preconception and bias.

The very language of the poems sometimes comes from what feels like a different era: trepanation (drilling a hole in the skull); coronach (singing at a death); Scheewittchen (Snow White); aubade (poem/song for early morning); Cthulhu (fictional dragon-like sea entity). These are all words and themes just crying out for a poet to explore and utilise. Burn has tapped into their fascination, strangeness and endless possibility with great passion. She tells us in the opening poem, ‘Trepanation’, “I opened my head to     the luminous fusion of stars”, and so begins the fearless dive into her extraordinary and unique imagination. The second poem also gives early notice that this may be a writer on the autistic spectrum, a fact that does become more and more feasible as we journey through the collection.

The poems are peppered with references to fairy tales, Christian liturgy and ritual, all areas redolent with mis-use of power, existential threat and spiritual struggle. They often talk of disappointment, be that with personal appearance and decision making, or with adherence to domestic routine. In ‘Coronach for my slender waist’, Burn speaks of a time when she did not have to “purchase clothes with space enough to hood my fat cathedral”. Here she perhaps plays with the idea that a writer can fill themselves with words, learn “the rapture of overindulgence”, just as a person can gain weight from over-eating:

“Once written, a word leaves its comfort on your tongue,

leaves its boot against your brain.”

In ‘Mrs/Mother   Hail’, Burn mimics a prayer but with four-line stanzas beseeching a rather particular deliverance:

However, the reader might believe that for Burn religion “has not/been enough”. Indeed, words like ‘forgive’ and ‘baptism’ are there ingrained in how she expresses feelings about some of the ugliest experiences of her life, such as the abuse described in ‘So you made a thousand shit decisions’, which ends “You wore a font of blood   It stung”. Likewise, in ‘Red’, Burn quotes Psalm 51 and cries “to the closed wood of the church door”.

It is challenging and effective how throughout the work Burn mixes ancient and modern, religious and secular. She plays with the style of old fairy tales, but inserts striking contemporary phrases, as in the five part piece about her struggle with autism, wrapped in the tale of Gerda and the Snow Queen where:

An intelligent and well-researched collection, there is no accident in its curation, in the cerebral process and craft. Burn has a great deal to express, including bisexual thoughts and her exploration of newly-diagnosed autism. There is much self-flagellation. For example, in ‘The Cursing Psalm’, Burn pleads “Have mercy on me, this clusterfuck”, and in ‘There are things that give me away if you know how to look’ she talks of her fringe “creeping down (her) forehead like beetles”, and the redacted lines suggest self-loathing.

However, there are moments of dark humour which rescue the reader from the intense waves of near-depression. In ‘Are Vaginas a Deal-Breaker Thing?’ – there’s a title right there – Burn dares to talk of examining her own vulva, “Use a mirror and get to know yourself”, imagines sharing the bathtub with another woman, finding “there really is a place there called Twatt.” I was intrigued by the poem ‘The First Time I Really, Properly Swim’ with its reference to the River Tyne. In it Burn winces “as (her) vulva/ is cupped by a curious hand” and you can’t help wondering if this is simply the sensation of cold as she wades into the water, or if this first proper swim is a sexual encounter which takes her “this far out”.

Another trope employed in the poems is that of birds, their perceived fragility sometimes representing Burn’s own vulnerability, like the sparrow that gets too close to the sun:

“I heard her cry before she made a candle of herself –
saw the colours of her song, so much brighter
than her Earthen body was. I hear the efforts of my own heart,
wrangling with ideas of life inside the egg of my chest.”

In ‘Grin Both Ways’, Burn longs for “the peace of birds”, sees “a crow balanced on wire” and vows “I have to start myself again from scratch”. ‘Poor blackbird crumb’ describes a bird thudding into a window and Burn making a charm, trying to “make it cry back alive”. These battles and catastrophes echo the many demons Burn seems to be fighting, the constant self-doubt and looking back at mistakes and bad experiences. She concludes “there will be no more predictability of things” and ponders her own demise, her own death, thinking “if this has to be the end   at least you have been fed”.

I rarely read a pamphlet or collection and think to myself, I’ve never read anything quite like this. Usually there are echoes of other writing and influences, even if the writing is incredibly competent and has its own clear voice. Other writers use myth, legend, fairy tales. Other writers tap the rich vein of church and its rituals. Other writers speak of their sexuality and even reference their poor mental health. With ‘Be Feared’, I really haven’t read anything quite like it. Maybe it is the singular imagination, honesty, and fearless pursuit of all these things together in one thundering, blistering, searing ‘shout out’ to being different that sets this book apart.

Maybe it is recognising elements of yourself; people you know; encounters you have witnessed, that makes you put yourself through the pain of some of this poetry. Whatever it is, this collection stands out as fierce, powerful writing with its own character and it deserves to be read and celebrated. Whatever I might have thought I knew about Jane Burn, I now think I know more, a deeper truth, and I feel privileged to have glimpsed her world through her poetry.