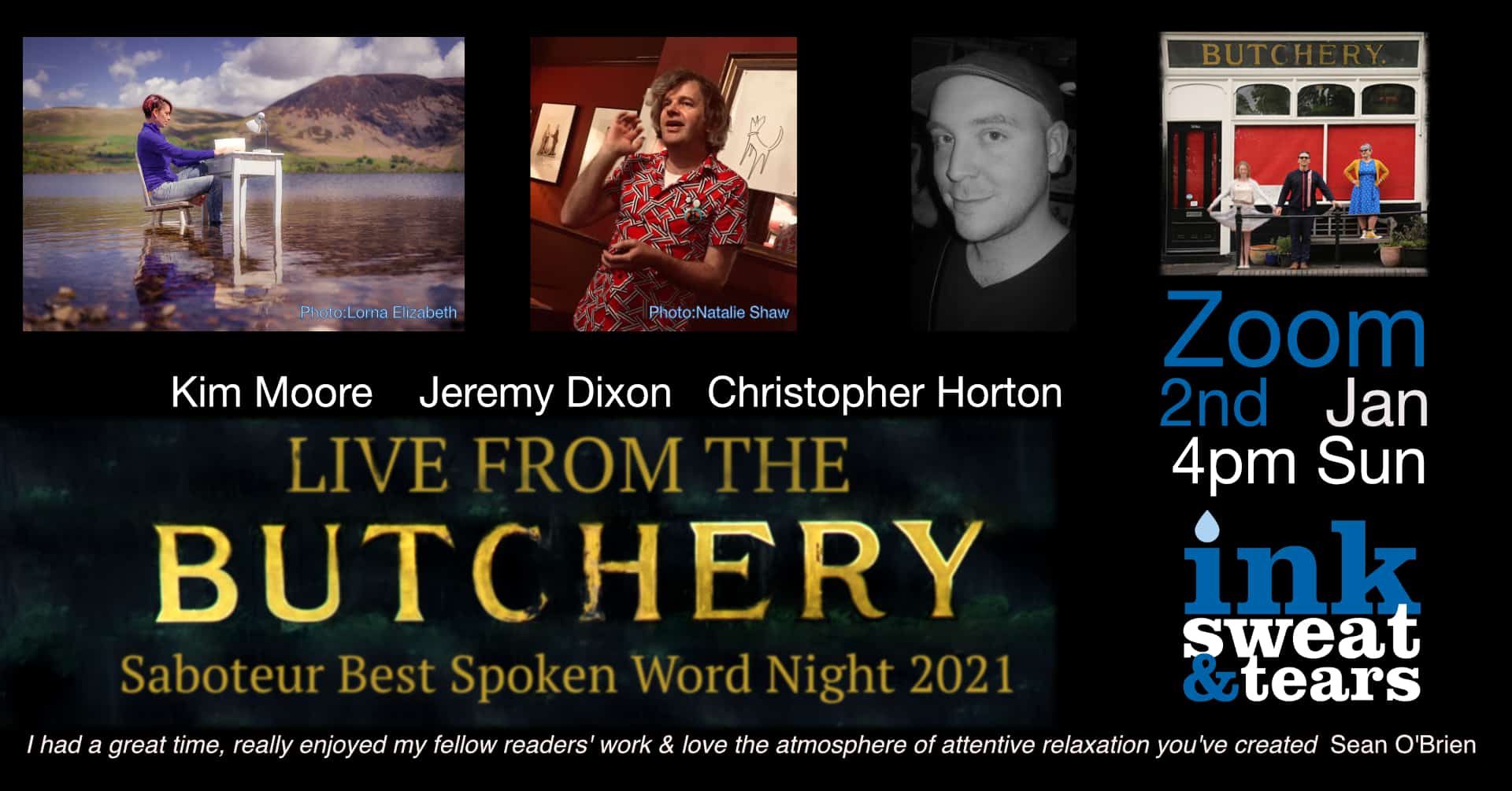 Please join us on zoom for live readings from Kim Moore, Jeremy Dixon and Christopher Horton on 2nd January 2022, at 4pm UTC

All the Men I Never Married No.48

When he told me not to tell the story
of my mother’s hair, I was obedient
for many years, until I saw the video
of wild horses in Patagonia,
tamed by increments over many days,
the gaucho calm and still when the horse
met his gaze, then shooing it
as it looks away, and so the horse learns
that only when it gives its whole attention
to this man will it ever feel peace again.

And of course my mother is not a horse,
she would never be fooled by such a trick,
but maybe the man who told me not to tell
is the gaucho, maybe once I was a horse,
to spend all these years listening to his voice.
He told me this was women’s business,
that the world was not interested in such things.
He said listen to me read Eliot until you fall asleep
or until the red wine runs out, and so we did,
all of us who had gathered there to learn.

He stood in front of the curved window.
The bats criss-crossed the lawn.
He did not hold a book, or open his eyes
to see if we were there. The room took
his voice and gave it back to every corner.
It felt as if he whispered in my ear.

I have held my tongue for years.
My mother’s hair. I did as I was told.
She sat for hours between my legs
as if she was the child, and I the mother.
I straightened her hair, every curl and kink,
dividing it into smaller and smaller sections.
The hiss of steam. The TV in the background.
My father elsewhere, and part of me still there,
part of me in the library with the man
who told me not to speak about such things.
The lawn. The drifting dusk. The bats.
My mother’s hair. My hands. That house.
The shudder of a horse’s flank.

Kim Moore’s pamphlet If We Could Speak Like Wolves was a winner in the 2011 Poetry Business Pamphlet Competition. Her first collection The Art of Falling (Seren 2015) won the Geoffrey Faber Memorial Prize. Her second collection All The Men I Never Married was published by Seren in 2021. Her first non-fiction book What The Trumpet Taught Me will be published by Smith/Doorstop in March 2022.

Jeremy Dixon is a poet and maker of Artist’s Books. His poetry has appeared in Butcher’s Dog, Found Poetry Review, HIV Here & Now, Impossible Archetype, Lighthouse Journal, Riptide Journal, Roundyhouse and other print and online magazines. He is the author of the pamphlet In Retail (Arachne Press, 2019). His first collection A Voice Coming from Then was published by Arachne Press in August 2021. The book unfurls from his teenage suicide attempt to encompass themes of bullying, queerphobia, acceptance and support. It also includes unexpected typography, collage, humour, magic, discotheques and frequent appearances by that Victorian demon, Spring-Heeled Jack.

wraiths appears is A Voice Coming from Then which you can buy here: arachnepress.com

The Plaster Cast Figures of Pompeii

The method of taking plaster casts…was introduced at Pompeii by Giuseppe Fiorelli,
director of excavations between 1860 and 1875. It involves pouring liquid plaster
into the cavity left in the compacted ash by the body of the victim  –
Pompeii, Pier Giovanni Guzzo & Antonio d’Ambrosio

A glut of hydrocal pipelined to the heart
of an air gap – a body of air,
confined for two thousand years,

or perhaps not air at all
but what remains when cell-matter
is sealed, locked into the strata.

From a hairline crack
drawn across a bed of ash,
to a chiselled hollow, to this,

this moulded form, this human fossil,
remade, remodelled, real as flesh.
A cart driver, parodied by the absence

of a mule, is cast in his final act,
and might be praying in that fragmentary pose,
having let go of the trace, his hands

bound palm to palm and lifted up to his head,
his head bowed down to his hands.
Further along, a dog flips back

on itself as if upended or leaping
to catch a ball – hind legs playfully foetal,
open-mouthed to the possibility

of a last bark. A second human figure lies out
on a slab, appears to smile, like a groom
in the milliseconds before a post nuptial headshot.

Christopher Horton’s poems have appeared in Poetry London, Poetry Wales, Ambit, Iota, Magma, Dreamcatcher, The Wolf, Stand, Other Poetry and anthologies with Penned in the Margins, tall-lighthouse, Broken Sleep Books (from Jan 2022) and Days of Roses. He has a been a prize winner in the National Poetry Competition and the Bridport Prize. He won first prize in the South Downs Poetry Festival Competition in 2021 and had another poem highly commended in the same year of the competition. He was also commended in the Verve Poetry Festival Competition 2022. His first collection, Perfect Timing, is released by tall-lighthouse. Website: https://www.chrishorton.info