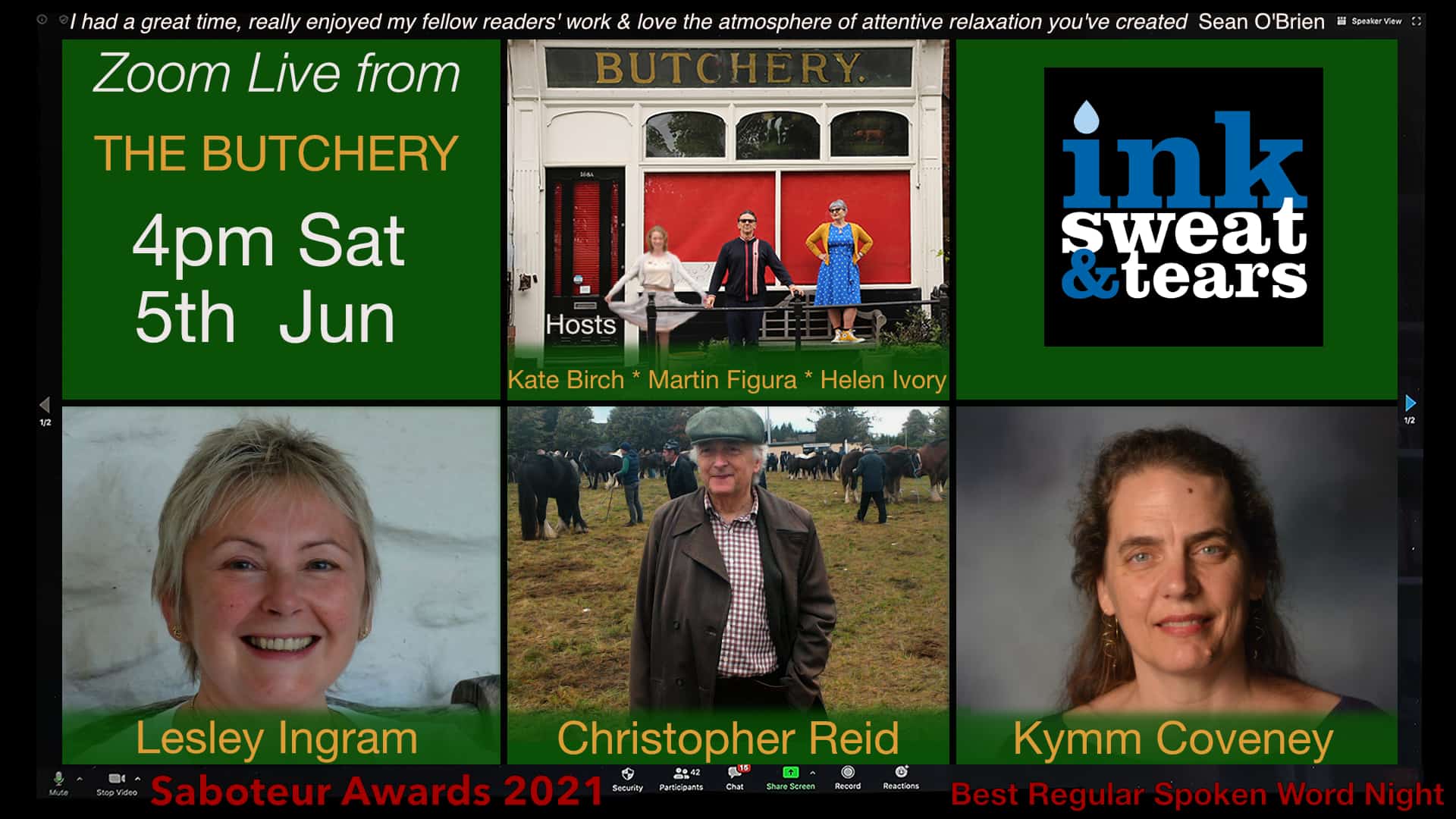 Please join us on zoom for live readings from Christopher Reid, Leslie Ingram and Kymm Coveney  on Saturday 5th  at 4pm GMT

Email Kate Birch at inksweatandtears@aol.com before for meeting details.

A fox, a dainty young vixen,
lay on my mother’s lawn, dead.
She lay on her left side, frozen
mid-trot, as if targeted
by Death the Sniper – hidden
among the trees, or crouched overhead

on the bungalow roof. January
frost had struck and silvered
the garden all over, every
grass-blade, leaf and twig. Nothing stirred.
The effect was both pretty and eerie,
like some enchantment suffered

in a fairy tale. The fox, also,
had lain there long enough
to begin to undergo
transmutation: outer hairs stiff
with glitter, while the rich pelt below
remained the colour of snuff;

a sparkle added to the white
of the muzzle. No wound visible.
Her upper lip lifted in a tight,
toothy sneer showed how contemptible
she considered this impolite
interruption, and resembled

a look that had crossed
my mother’s face as she lay dying
not three months past.
I couldn’t keep the creature lying
like that. Working fast,
I was soon plying

a spade in the hard earth
at the back of the garden.
Job done, all that was left
was the grass-green silhouette of a vixen
nimbly stepping forth
to meet her fortune.

Christopher Reid has worked in publishing (as poetry editor at Faber and Faber) and at the University of Hull (as Professor in Creative Writing). His own most recent publications include Old Toffer’s Book of Consequential Dogs (2018), a canine counterblast to T. S. Eliot’s Old Possum’s Book of Practical Cats, and The Late Sun (2020). Having edited Letters of Ted Hughes (2007), he is currently engaged on a selection of Seamus Heaney’s correspondence.

I remember how sunny the day was
pretending to be, how bright it was in the kitchen

the watery shadow of my father disappearing
and my mother

a strange-woman, child-woman, old-woman left
on her knees and screaming

how silent I was

how only I know this

where the fault lies

Lesley Ingram was born in Yorkshire and lives in Ledbury. An ex IT Business Systems Analyst, with an MA in CW, her first collection Scumbled (Cinnamon) is based on her dissertation ‘Ekphrasis as Translation’. Her poems have appeared online and in printed journals and anthologies since 2010,  and she has appeared at Cheltenham, Wenlock and Ledbury Poetry Festivals. She runs the Herefordshire Stanza and won the Poetry Society’s Stanza Competition in 2020. https://lesleyingram.wordpress.com

My Married Girlfriend
sits at the head of the table, drinks the last of the wine
takes the prime piece of lamb, wipes the plate with her bread
burps loudly. Digs a hole in the high-gloss wood varnish.

Some Guy I Dated
stands at a crosswalk waving mauve panties I lost. I haven’t
worn that brand in years. He tells my late husband they were
stained from my period. He puts them back in his pocket.

My First Husband
sits in the lounge near departures with a beer and a cigarette.
Takes the scarf I knit our daughter and burns little holes in it.
Takes her hand and tries to burn it, too. Flicks ash in her hair.

My Father-In-Law
picks me up in his immaculate black Audi, drives to a trendy café.
Steers me to a table, sits me in a chair. He goes to wash his hands
in the men’s room. Comes back, has a coffee at the bar. Leaves.

My Mother
calls long distance, with a card bought special. She tells me how much
it costs. I can hear her tearing at something. A slow rending. Loud.
The ripping does not stop. Someone else hangs up.

Kymm Coveney has been riding out the pandemic in her native Boston, Massachusetts, where she’d gone for a visit in February 2020. Spain has been her home since the 1982 World Cup, and she is planning to home to Barcelona in the fall, where she hopes to resume her duties as co-host of Barcelona’s multilingual poetry recital series, PoémameBCN. Over there she was a freelance writer and translator, as well as habitual translation slam moderator for MET (Mediterranean Editors and Translators). Her poems have been published in Ink Sweat & Tears, as well as The Blue Nib, Under the Radar and Prole, among others. ‘Cauldron Song’, included in The Blue Nib, was highly commended in Prole’s 2018 Prole Laureate poetry competition. More poems, flash fiction and translations can be found online through betterlies.blogspot.com. Twitter @KymmInBarcelona.

Trolls was first published in The Interpreter’s House #60