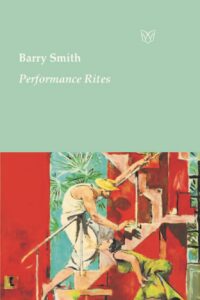 Barry Smith’s debut poetry collection is a cornucopia of his rich life and artistic experiences. These poems draw on his life as an educator, theatre director, music lover; Smith directs the South Down Poetry Festival, co- ordinates Chichester’s summer arts festival, curates the poetry element of ‘Blakefest’, and is a long-established resident of Sussex.

Accompanying Barry Smith on the page as he rambles on the Downs, visits village churches, and walks on the shoreline becomes an intense learning experience. He digresses naturally and casually to meditate on historical events that took place in those same places: in ‘Bosham Harbour’ he is fully aware of the present, where “the clutch of anchored craft /bob and balance in the harbour […] limbering boys /with gleaming eyes skim pebbles” and “High-stepping oyster-catchers […] pick their prey with neat /economical dabs” while simultaneously reminding us of the fact that “on another day /when the light splintered /gold and grey on the water”, King Canute demonstrated to his fawning courtiers the limits of his power to hold back the tide. Typically, Canute’s name doesn’t appear in the poem — the reader is expected to remember the legend and guess that it was set in Bosham. I must confess that I had to use google to make sure I had guessed/remembered correctly.

Smith achieves this balance between lyricism and didacticism again and again. He succeeds because he is intensely aware (and appreciative) of the details of the natural environment, and of the way that humanity impacts upon it. Simultaneously his experience of the places writes about is coloured by his wide and deep knowledge and awareness of history, English and local.

Barry Smith’s poems about flowers show his painterly appreciation of colour and texture. His love of language—the technical language of the horticulturalist and botanist—is clearly relished. He lists all the roses in ‘Rose Garden’ and in the wild he names and details the plants and creatures along the way.

Smith’s anecdotal and narrative poems occur at intervals throughout the book. Encounters with strangers, or accounts of their interactions with each other, are observed with compassion or humour or simply set out for the reader to enjoy. In ‘On the Rise’ the narrator is sure he “met Elvis on the rise at Brighstone /tending the frisky black-faced Shropshire lambs”, recognising him as Elvis from his hair despite his blue overalls and horn- rimmed glasses. In ‘Off your Trolley’ a waiting room full of men waiting for medical treatment are heard and seen by the narrator, in all their anxious, wisecracking, fearful reality.

Barry Smith’s work in theatre and spoken word inspires several poems in which he explores life as a construct and people as players of roles. His evident enthusiasm and first-hand knowledge of directing, acting and taking shows to festivals is infectious. I enjoyed being blinded with theatrical lighting jargon and travelling up to a muddy campsite and encountering damp Edinburgh Festival streets and entertainers in ‘Inflatable Floors’. I loved the troupe’s satisfaction after the Shakespeare play they presented—they realise “we have stared together into the dark / just for a moment we let out a breath //and transcend those inflatable floors.” (The joke is, we don’t find out what “inflatable floors” are—we have ignored a tout urging us to come into a show and see them.) These poems may be metaphorical in intent, but they can also be enjoyed as vivid descriptions of theatrical life at this level.

And there are other poems doubling as memoir: a first girl friend is remembered as the person who told him that Kennedy had been shot; in ‘My Father’s House’ he speaks of his father’s experience in WWII and how he dealt with his memories; the enjoyment of the work Smith did when presenting jazz and poetry at the Chichester Festival is expressed in a breathless recounting of the dialogue among team-mates on the day.

Then there are the ekphrastic poems: I particularly liked ‘Framed’, about Howard Hodgkin, whose paintings I myself enjoy. Smith comes at his subject from an appropriately slanted direction and clearly knows and understands Hodgkin’s methods. ‘Framed’ sent me to Google again, with its epigraph “After Howard Hodgkin and Errolyn Wallen”. When I saw that Wallen had tweeted about “stepping through my magic door” to compose music about a choppy sea, I thought I understood a little better why she was included in the epigraph.

A section headed ‘On the Rocks’ comprises poems about the dark side of being human. ‘Elizabeth, Pregnant’ is in the voice of a woman whose husband has died fighting in the First World War. She speaks out of stoicism and grief. The last lines pun on Shakespeare’s line “Once more into the breach”: “…his farewell gift, my last little one, //slipped squirming into the breach.”

‘The Last Jew of Vinnista’, in this section, is perhaps my favourite poem in the collection: a short, stark, factual description of a photograph taken the moment before a fascist ‘execution’. This is the last stanza:

“there is a photograph

and there is another man holding the camera.”

This is a substantial collection which is presented in four sections, each named after one of the poems in it. If the book has a flaw, this, in my opinion, is its only weakness. The sections interrupted the flow of the poems for me. I found myself trying to work out why some of the titles had been included in the section where they were placed and not in another. The collection would be equally coherent if the section breaks didn’t call a temporary halt to the reader every nineteen pages or so. It coheres because Barry Smith’s mind and voice echo clearly on every page, whether he’s narrating an anecdote, ruminating on a historical or existential parallel, celebrating a moment of sensual visual pleasure or recording horror at man’s inhumanity. His language can be vividly painterly, musical, or colloquial. He has a great deal to say, and he has written a book that will speak to a great many readers.

Janice Dempsey is a publisher at Dempsey and Windle.