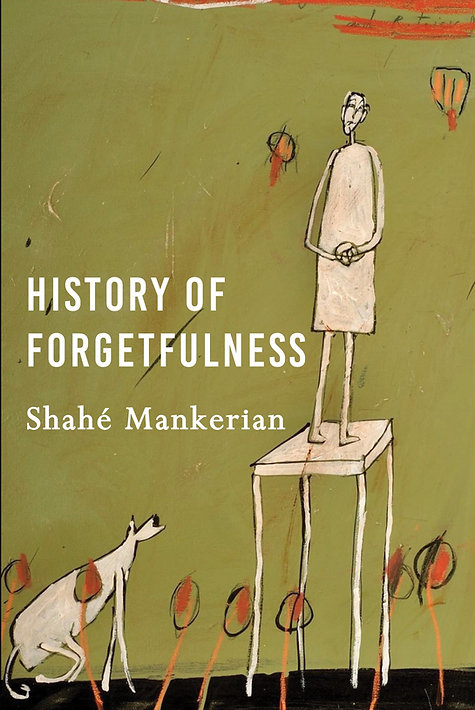 Beirut, 1975. I remember the news bulletins, the disbelief that anyone, let alone children, could survive the horrors of a bloody civil war. But they can, and Shahé Mankerian’s  History of Forgetfulness delivers an extraordinary testimony.

His poems are emotional grenades – all the more so because we’re not treated to the familiar tropes. Dead bodies, yes. But life continues, almost miraculously, along the tram-lines of a kind of normality; the normality children construct instinctively when powerless, winkling out humour and even wonderment from the violence.

In ‘The Last Mosque’, Christian boys hide from approaching planes, praying that Allah will protect them from the bombs. One of them continues to play outside. Afterwards,

. . . the search party wanted
to find pieces of Avo: his threadbare socks,
shorts the shade of the Mediterranean,
brown belt with tiny cowboys on it.

Mankerian is a master of the understatement. He can recreate the surreal awareness that arises in moments of intense danger, whilst tethering the reader to the bodies, to the pain, to the unbearable reality of watching your friend obliterated.

On the telephone wire, I mistook the ragged
Lebanese flag for his Tintin T-shirt.
A broken Coke bottle reminded me of his
reading glasses. . . .
We ended the search when we found a trail
of killer ants, a satchel of marbles . . .

One more death. One more statistic brought to life.

Struggle and pain surface in a domestic setting too, through his mother’s abuse at the hands (and sometimes fists) of his father. In ‘Armenian Politics in the Kitchen’ the father refuses to let his wife cook with eggplants, because “Turkish recipes tasted suspicious.”  In the masterful ‘Homecoming’, Mankerian uses detail to rivetting effect:

The Moroccan maid stopped sweeping
when he reached the second-floor landing.

She moved to the side, avoided eye contact,
and murmured marhaba. Father leaned

against the railing and forced his hernia belt
into place . . .  kicked the misplaced dustpan

near the floor mat. I waited by the door
with his leather slippers. My brother practiced

the piano. We wanted him to think
he was stepping into something perfect.

Mankarien’s laid-back, almost casual style is deceptive. It offers up little stabs of horror, then lets you recover just long enough to be pistol-whipped by the next one. Scratch the surface of most of these poems, and there’s buried anger.

While playing hide-and-seek
beneath the railroad bridge,
we found her bicycle
before we found her shoes.
Her body had a shape
still dressed, sun-dried . . .

Dead bodies are empty vessels, silent, finished, statuary. The living are little gods, free to run, laugh, play – for as long as the sniper lets them.

Mankerian is treading on eggs shells here, balancing the unspeakable with the need to speak it. Occasionally, he tries too hard, such as in ’A Mother’s Prayer’:

“Your sons are guilty of a holocaust.
My husband’s upper half is in the fridge,”

Or in ‘La Quarantaine’ where he tries to intersperse Mozart’s Requiem with the sounds of the Karantina Massacre. But for the most part, he hits a true seam of compassion for his younger self. In ‘9th’, classical music is genuinely revelatory:

I didn’t care for the bombastic choir: they drowned
the rat-a-tat of M16s. I sifted through the noise
like a deaf beggar sifting though trash . . . That’s how
I discovered the French horns, so lonely and lost,
buried deep in Beethoven’s Ninth.

Using his artistry and humanity, Mankerian presents his traumatic childhood in a deeply relatable way. Towards the end of the collection, there are strong poems about his mother’s eventual dementia, and his father’s death, but for me, the powerhouse of this extraordinary collection are the poems about childhood.

In ‘Resourcefulness’ the boys glean a make-shift pinball game from a discarded chopping board, nails, rubber bands, clothes pegs and marbles, and entertain themselves while the rooftop sniper sleeps.

We played deaf to the sirens from the seaport
like those sailors Ulysses employed on his black ship.
Carcasses floated on the Mediterranean. We huddled
between battered buildings, witnessed a game
of makeshift pinball, and wished St Charbel
replace the lint in our pockets with liras.

This is a world where a newspaper boy, calling out the names of massacre victims, gets urine emptied over his head for a dare, and the poet and his brother double up with laughter. This is where militiamen “sleep with machineguns as their malign mistresses,” and where, despite those snipers, a boy climbs a church steeple to get the perfect view through a stained glass window of the girl he loves:

Sometimes it rained. Sometimes
he stared at the green eyes of Christ
above the altar, but he never moved.

History of Forgetfulness is immensely readable and always shocking. A must-have collection.

History of Forgetfulness by Shahé Mankerian (Fly on the Wall Press) is available here: flyonthewallpress.co.uk

Shahé Mankerian is the principal of St. Gregory Hovsepian School and the director of mentorship at the International Armenian Literary Alliance (IALA). This debut collection has been a finalist at the Bibby First Book Competition, the Crab Orchard Poetry Open Competition, the Quercus Review Press Poetry Book Award, and the White Pine Press Poetry Prize.

Claire Booker’s latest pamphlet is The Bone That Sang (Indigo Dreams) She blogs at www.bookerplays.wordpress.com