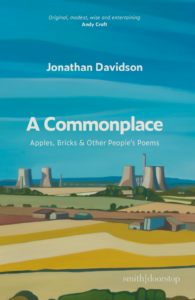 Jonathan Davidson’s A Commonplace is an act of poetic generosity. Fully in the spirit of his entertaining and engaging essay-memoir On Poetry (also from Smith/Doorstop in 2018), the author seeks to remind us of the importance of sharing verse, and not just one’s own. This impulse has been a significant feature of Davidson’s career as a promoter of literature, whether on stage or on the radio, or as co-founder of the Birmingham Literature Festival. Here, this enthusiasm extends to inviting poems by other writers to share the pages of his own book.

A Commonplace, then, is not a straightforward collection of one author’s work, but offers instead a meditation on the importance of poetry for living, illustrated with favourite pieces by a range of post-war poets (from celebrated names to less well-known voices), Davidson’s own fine poems, and short prose pieces that reflect on the themes of the book. These prose segments are hugely engaging, not least because they are peppered with surprising footnotes on everything from Bertolt Brecht to lichen. The overall effect is of being present at the best poetry reading you ever attended, where Davidson guides us through the poems with charm and erudition.

This charm, however, never hides the passion that drives the writing. Davidson’s key theme is that of paying attention. Whether he is talking about Flemish bond in brickwork, the ideal qualities of racing bike frames, or the sensation of watching a train approach a platform at Didcot Parkway, Davidson’s own poems in the book (and many of those he chooses to include by other poets) are concerned with the specificity of things and the care we should take to appreciate them. Arguably, of course, this is what all good poets do, but in Davidson’s case, the act of paying attention takes on an ethical dimension. What matters for Davidson is that, through this attention, we practice discernment, that we learn to see what really matters.

The leaves are turning

Early this year and we failed to pick all of the

Beautiful blackberries because we were watching

A long-form drama about some world that doesn’t

Exist but would be fun if it did.

The ‘sweet dark taste’ of those blackberries is not an insignificant thing, the poem suggests, because if we are not giving our attention to that piece of reality, then we are not giving our attention to much else that is significant: for example, the need ‘to build houses for the people who need / Houses, and giving food to the hungry and clothing / To the cold.’ It is not the devil who lives in the detail, but utopia itself. When we become estranged from experience and stop caring about its qualities, then we turn away from the world and lose our sense of our place in it.

Although the book is by no means a manifesto, an argument does emerge from its pages. Davidson not only asks us to be interested in the specific qualities of the world around us and our experience of it, but he makes poems that are exemplary of that care for reality. In his poem ‘The Silence’, for example, he wants to show us the significance of different kinds of silence:

Silence but often breathing, the orchestra

Of flesh and thought caught in looped

Arpeggios. But back to the silence,

That comes at the start and finish

And places a hand on our shoulder

Or takes our hands and leads us not

To heaven or hell but into the ever-

Lasting place of unknowing, from where

Attending to such silences, the poem shows us, gives us access to the truth of our condition, as creatures emerging from and returning to nothingness, with no gods to give meaning to that journey and no reward or punishment at the end. The poem asks us what we are going to do with the time between those silences. It does not have an answer for us, but it reminds us that we need to face the question.

A Commonplace is unlike any other book you will read: simultaneously an anthology, an essay, an entertainment, a poetry collection and, even, a travel guide (if you care to follow the route suggested by its accompanying gazetteer), it is a moving and enlivening reminder of the importance of poetry and the quiet power of Davidson’s own work.

David Clarke’s first pamphlet, Gaud, won the Michael Marks award in 2013. His first collection, Arc, was published by Nine Arches Press in 2015 and was longlisted for the Polari Prize. Another pamphlet, Scare Stories, was published by V Press in 2017 and was named a Poetry School ‘Book the Year.’ His most recent collection, The Europeans, was with Nine Arches Press in 2019. His poems have appeared in magazines including Magma, Poetry Wales, Long Poem Magazine and The Interpreter’s House.

Jonathan Davidson is a poet, writer and literature activist. He lives in the English Midlands but works internationally. His poetry has been widely published and he has also written memoir and criticism. His radio dramas and adaptations have been broadcast by BBC Radios 3 and 4. Much of his work is focussed on how writing – especially poetry – is experienced by readers and listeners. www.jonathandavidson.net