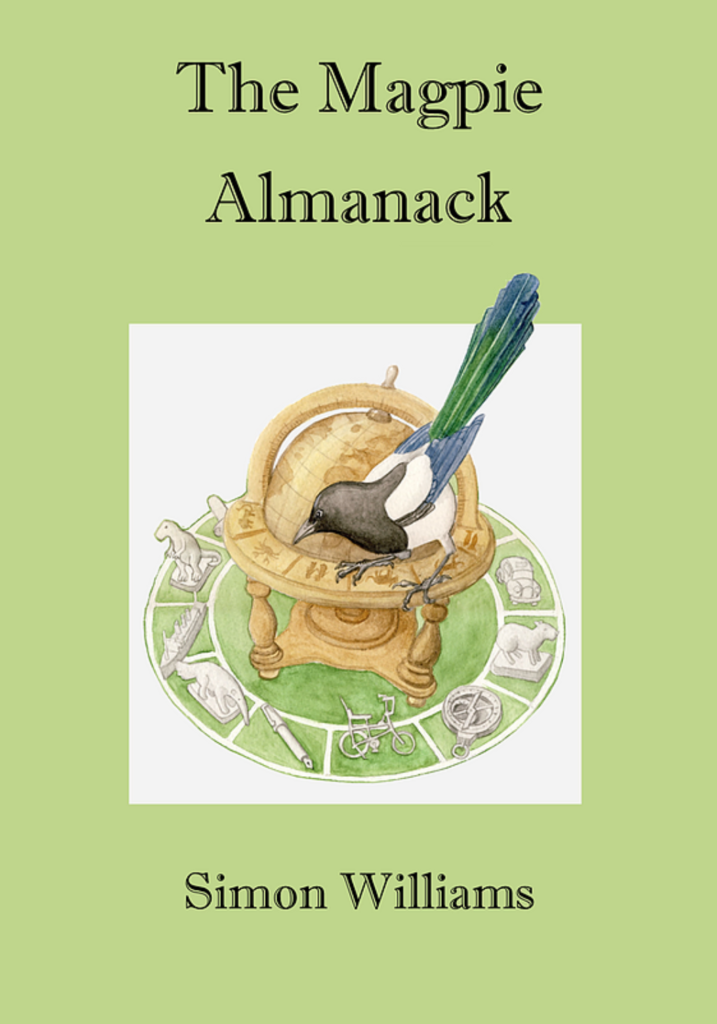 An original approach to the description and contemplation of life, nature and universal stories characterises Williams’s ninth collection. This ‘Almanack’ is a ‘magpie’ collection of often jokey, frequently ironic, sometimes surreal and occasionally serious poems, as though an impertinent magpie has picked them up like shiny fragments and saved them in its nest. The poet plays with words, important concepts and discoveries in skilful, accomplished lines. Simon Williams’ poems are highly entertaining and readable; he questions our certainties, suggesting a different viewpoint, a cheeky view, as in ‘Magpie Song’, where opposites coexist in the revised nursery rhymes and the ‘bold magpies’ explore different possibilities:

One for black, two for white,
Three for a hop and four for a flight.
Five for lows and six for highs,
Seven for a charm of bold magpies.

The collection is divided into five sections. The first, ‘About the Author’ portrays the poet’s self-image. ‘My Father’s Dinner Jacket’ is about much more than an item of clothing:

Each year, just once, I measure up to him,
see how I fit his DJ – black serge,
thin silk lapels, proper pockets.

In a typically tongue-in-cheek poem, ‘Rearranging My Pants Drawer’ the poet links the rearrangement of the socks and pants in his drawer to famous English poets, to William and Dorothy Wordsworth’s and to Shakespeare’s way of doing everyday things, and concludes that ‘Homer had it best, Greek weather/and a single robe, all the cloth he needed.’ The effect is to bring celebrated poets off the conventional pedestals on which ‘ordinary’ people often place them.

In the second section, ‘People & Animals,’ we find poems about real and fictional people’s exploits: in ‘Interview with a Blemmye’ (a mythical race of people whose heads are in their chests, who are depicted by historical mapmakers) the pros and cons of their anatomical peculiarity are discussed with a straight face; there’s an account of ‘Sir Walter Raleigh’s Cycling Tour of the Americas’ and other poems that overlap in mood and content with the later ‘Surreal’ section.

I enjoyed the poems in this section about birds and dolphins, the ‘ever-changing shapes’ of which suggest the versatility in nature that is reflected in the poet’s lines. The poet marvels at natural variety, as in ‘Little Gulls’:

The Greylag geese swim over,
hoping for bread we know

not to give them, and a heron loops
around the island, just to stretch.

The little gulls, in a set of surprises,
lift their wings like midget angels’.

So even the re-necked grebes on the water
and a roseate tern on the air, marvel.

As its heading suggests, ‘Poetry Art and Politics’, the penultimate section contain some poems of more serious intent. ‘One Euro and a Bottle of Water’ and ‘In Praise of Howling’ deal with injustices: discrimination against immigrants, and the issue of displaced people forced to work as semi-slaves. The people described in these poems have no access to the law, are hungry and have no money or only a euro left in their pockets. Williams howls against these situations in powerful lines; repetitions emphasise his outrage. And in ‘Poem of My Own Migration’ he sets out the ancestry of his own forbears, to hammer home the point against racial prejudice.

All the sections of the collection share Williams’ predilection to the humorous and the playful, but the last section, ‘Surreal & Dada’, further develop this strong leaning to the absurd in images that suddenly shift and surreal situations arise to surprise the reader. As in Dada and Surrealist writing of the original movements, there’s scatological humour, too, with a dry, Williams flavour.

In ‘Gents’, an episode involving a stranger who farts near the poet and ‘apologises profusely’ triggers a conversation between the people in the cubicles. Each suggests a different place where you can fart freely, such as the Amazon rainforest, the ice of Antarctica, or in a spacesuit that is ‘completely self-contained/and you’re the only one/who ever know.’ This transposition of a crude little incident into a serious discussion of alternatives is irresistibly silly — and funny.

Surrealism also infuses the sequence of haiku that closes the collection, ‘Nine Dadaist Views of Mount Fuji’: the juxtaposition of the traditional image of Mount Fuji with a succession of banal modern images produces shock and laughter simultaneously.

Hokusai enfolds
Mount Fuji in a great wave,
but no bicycles.

He scoops and sprinkles
granulated Mount Fuji
on his Weetabix.

This is a highly entertaining collection. Simon Williams’ poetic skill and vividly original imagination combine to cast an absurd, humorous or surreal light on any topic that he chooses to address. It’s a great read, whether you swallow it at a sitting, or dip into it at your leisure.

Carla Scarano D’Antonio lives in Surrey with her family. She obtained her Master of Arts in Creative Writing at Lancaster University and has published her creative work in various magazines and reviews. Her short collection Negotiating Caponata was published in July 2020. She is currently working on a PhD on Margaret Atwood’s work at the University of Reading. http://carlascarano.blogspot.com/ http://www.carlascaranod.co.uk/