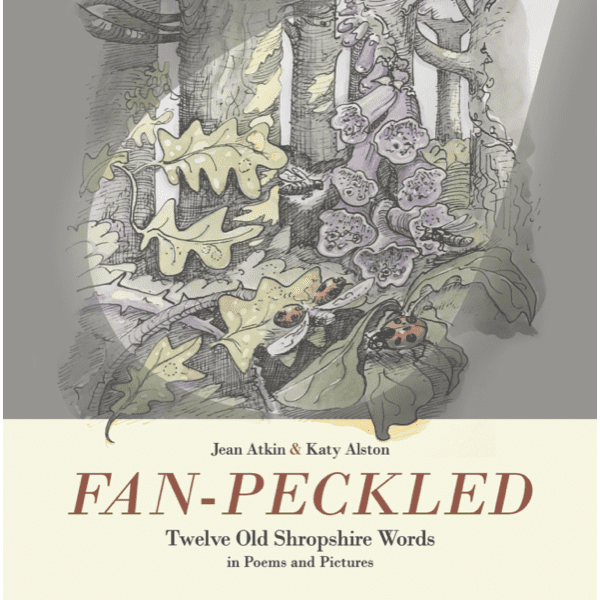 Fan-Peckled, by Jean Atkin and illustrated by Katy Alston, is a fascinating journey that has been written in an old idiomatic Shropshire language and was inspired by The Shropshire Word-Book, A Glossary of Archaic and Provincial Words, Etc., Used in the County by Georgina F. Jackson, published in 1879. The titles of the twelve poems are taken from the glossary, a selection of significant words that are followed by a description that defines them. The words are no longer in use and therefore evoke an ancient world: a tight community whose identity was rooted in this language, a language unknown to strangers and embedded in the landscape, in the earth and in the passing of seasons.

The poems evoke a world rich in its rural simplicity where the climate and country labour dictate the pace; it has a slow pace compared to today’s hectic life, a human pace that does not rush but meditates on details and is in harmony with nature. Repetitions reiterate the constant connection between language, the environment and the human presence in an enchanted yet real world. The illustrations linger and comment on details, focusing on striking images or characters depicted in the poems. The rendering is figurative and sketchy and highlights the genuineness of the stories and themes that fill this recollected world.

The tone is not nostalgic or sentimental and the themes are loose and open to connections with our time, in which environmental concerns ask for possible alternatives to our stressful and endangered realities. The archaic vocabulary is therefore a door that opens to another world that might be less far away and forgotten than we imagine. The words chosen by Atkin shape this world and trigger the imagination, recreating a realm of language that is near to us:

Last night there were the speckled lakes
on a sickle moon not watched
nor wished upon through glass.

Then morning fetched a dot-dance in the woods
of deckled oak leaves and the bee-pad
footfalls, pollen-tickled, in the foxglove.

Mister Ambler tells the Farmer Arms –
How Cuthbert, Hilda, Chad and Bede,
Aidan, little Ebbe – still peal some nights
And swing their heads, to chase away the storms.

This apparently idyllic reality has its dramatic moments too, which momentarily break the smooth surface, digging deep into the human experience; this encompasses sufferance and death in a renewal of life that is natural in its evolution, as in ‘Geolitudes’ (burst of passionate temper):

The flood is a disruption that is part of life, as is the woman chasing the red grouse whose ‘splash of blood fell onto white’, the white of the snow (‘Shalligonaked’, a jacket for out-door wear). The word geoltitudes is also related to our own time, to climate change and its impact on flooding. Striking unusual images are therefore reinforced by repetitions and powerful similes that reveal close observation and suggest the acceptance of the cycle of life. For example, in the poem ‘Glid’ (red kite), the flight of the bird is compared to ‘a loaf rising […]/more air than feather’ in a domesticity that is both down to earth and aerial. In ‘Keffel’ (worthless horse), the horse’s tail is ‘as thick and white as winter’, a device that immerses language in the environment. Some characters emerge in the poems and become related to one another. For example, John and his wife Milly, Kath and her little fan-peckled daughter, her husband Tom, the cartwright and his elder brother John.

This significant collection explores in poetry and pictures the 19th century idiom of Shropshire. The poems develop the potential of language to connect the old rural world to today’s realities and to propose alternatives to our difficult modern world. The connections between language, community and the environment shape a harmonious reality that is deeply related to the rhythm of nature.

Carla Scarano D’Antonio lives in Surrey with her family. She obtained her Master of Arts in Creative Writing at Lancaster University and has published her creative work in various magazines and reviews. Her short collection Negotiating Caponata was published in July 2020. She worked on a PhD on Margaret Atwood’s work at the University of Reading and graduated in April 2021.