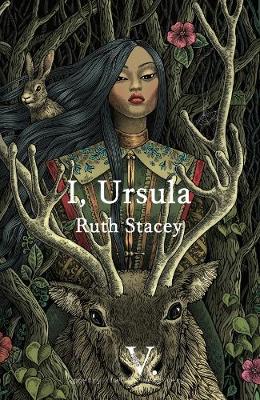 Ernest Hemingway once said “There is nothing to writing. All you do is sit down at a typewriter and bleed”. This quote comes to mind when reading I Ursula which comes across like it was written with a fluid and clear idea of what Ruth Stacey wanted to say about the frailties and strength of enduring mental health and life experiences. The cover shows us an astute woman riding a stag and garlanded in all her finery amongst the thick of the woods which already gives the impression of a dark fairy-tale and it is this conjuring that does not disappoint with an exceptional book of quality poems. The opening couple of poems are a caution that woman is a deep river and if you choose to explore her then this like an abyss will stare back at you and could ruin or complete you depending on what you value from a woman. Stacey is a master of deceptive language that haunts you by its lullaby and paradigm style. Before you know it, you are seduced and involved into the play of words and metaphors. The primal and controlled human are at conflict throughout the opening of this book:

“Bears are not good fuck-buddies,

They get possessive, Casual is not

Part of their lexicon, relying on growls,

gruff prose hurled into the neck.

You can hardly make out the words

Because bears are distracting

When they are inside you

At around a third way in the shift changes in a gut puncher of a poem titled Iseult Gonne continued later in Woodlander. The theme of still birth is a subject that is rarely mastered to devastating effect by some of the bravest poets in European writing today (nod to Wendy Pratt and Museum Pieces et al). The sparseness and brevity of the poem Iseult Gonne leaves the most maudlin conclusions to your imagination but in the montage of triolets look at this definition of loss and you will feel as you read the lingering desolation of life lost that was carried deep:

The candle is lit

lit and blown out.

You cannot create a life

out of a dead baby –

you just can’t do that.

The Woodlander in common folklore is the heroic figure but the heroic figure here is enduring any loss by not overcoming it but accepting it is part of you as much as any internal organ except this loss was uninvited. Stacey intersperses styles here from loose prose to tight configurations of 3x3x3x3 or 6x6x6x6 and the beats act like hooves roaming the woodland narrative she conceives and you are not going to find your way out easy because I took from this book that we are as deep as a forest, as Ursula. From the sinewy arms of the startled trees to the wet mossy purifying filtered words and poems that flow from one page to the next this is a book that you can return to and read whole or partially as themed or an un-themed piece. It is possibly Ruth Stacey’s best work since Queen Jewel Mistress and is one of those books you root will do well. A sumptuous piece of work from a writer that is going from strength to strength.

Excerpt from The Woodlander:

A stillborn baby must be buried too;

any tree may mark the grave he thought best.

To not know makes any wooded view

a cold graveyard instead of a forest.

With five collections of poetry focusing on conflict Antony Owen is a well respected writer known for investigative poetry which took him to Hiroshima in 2015 to interview atomic bomb survivors. His subsequent collection, The Nagasaki Elder (V.Press) was shortlisted for a Ted Hughes Award in 2017.  His  sixth collection The Unknown Civilian is published by KFS.

I, Ursula by Ruth Stacey is published by V Press and available here: https://vpresspoetry.blogspot.com/p/i-ursula.html