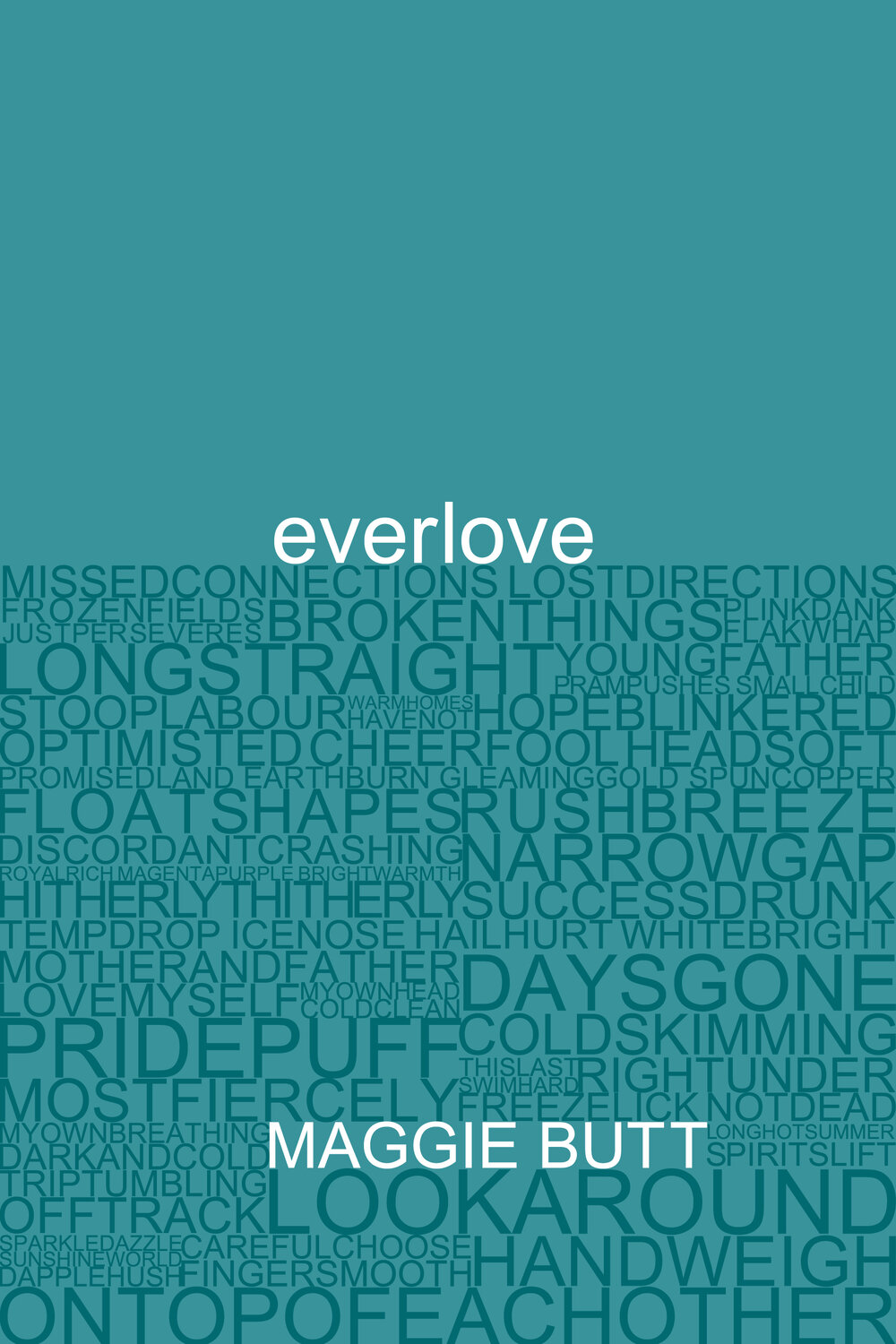 Everlove is a title to live up to but the poems in Maggie Butt’s sixth collection are everloving in that they demonstrate her enduring and empathetic concern with the human condition.

The collection is arranged in three sections, the first of which ‘Torn’ is ekphrastic poetry inspired by the work of Mary Behrens. The artwork is a ‘series of distorted and reassembled photographs of refugees’. The poems stand independently from the artwork, as I believe ekphrastic work should, claiming their own space and value. All the poems have stark single word titles, except for the last in the section, which contribute to the impression of refugees’ lives as being stripped to the basics of survival. These poems have stayed with me for the questions they raise; deceptively simple but so disturbing. Which shoes would I wear? How much rice could you carry? or water? How do we hang on to an idea of who we are when jobs, homes, communities are left behind? The poems throughout the collection are formally various and close attention has been paid to shape and sound, here, the straightforward language increasing the emotional heft:

Maybe you’d imagined a funeral, with relatives
and eulogies, flowers and tears. Not your daughter
scraping a shallowpit with her fingernails,
scattering shingle over your body, not knowing
the words to send you to the afterlife,
(Die)

The title of the final poem in the section, ‘Hope-road’, suggests hope for the refugees but, instead, shows the desperate conditions that may await them. Counterpointed by quotes from a young girl refugee, ‘girlsays there’s hope in a road, right?’, the crushing pressure of scraping a living is evoked through neologisms:

‘Hope-road’ leads neatly into the second section ‘The Fallen’, which shows us the consequences of the pressures in a world that creates refugees. The Fallen of the section title poem are homeless, around a brazier, but the reader soon finds they are more than homeless people and is led to consider who, or what, we have neglected. They have wings which are ‘sodden hunks of feathers, / greasy and furled, tight as fists’ and when they speak, one is ‘the sound of an iceberg splintering. Another replies / with the crackle-and-roar of forest fire.’ These poems show us a world of what-ifs: a word without bees where ‘Gold is falling on the honey standard’ (After the Bees); where ‘Part of the cliff falls away to reveal the stratum / of compressed plastic’ which is a record of ‘last vestiges of an extinct species / which could never get enough. Stuff’ (A History of Stuff). In ‘The Repair Shop’ People queue with broken items to lay them ‘on the altar of the priests and priestesses / with the power to touch the chipped, / the stopped, the stained’ as if mending can turn back time so that the poem ends with a wish, a plea:

And we, the hungry-eyed, watch for a sign
that our splintered world could be restored
by someone with the skill and patience,
the paint, glue, solder or stitch to repair time,
to return us to the days before the age of touch
slammed shut in our astonished faces.

Following the warnings and what-ifs of the first two sections, the final section ‘Fjordings’ seems to offer at least hope of redemption. There are some beautiful, lyrical poems about finding small joys around us, such as reflected light off holly and ivy which are ‘flecked silver by streetlamp, / star-tipped for nobody but themselves, / decked with nothing but their own glory.’ (Illuminations). We are shown how love, like music, light, and dust, will

Yet this is no Pollyanna optimism. Living fully, which the poems urge us to do, is not without risk. The title poem of the section shows us that fjording is not ‘a body-of-water / not even a slick-of-moonlight’ but an irresistible call ‘to push out a coracle and step / from dryland onto the life-risk, / heart-race rocking adventure of go’. And loving fully always risks loss so that a shared summer afternoon of cricket and reading poems ends

recrossing on the wicket, and not a warning
of the featherbed silence which will fall

when the ground is cleared at close of play.
(Batting Partnership: 34 Not Out)

There are so many more poems I would like to quote but risk quoting the whole book. It is a collection I will return to. It is real, and human, and unflinching. I will try to remember its urging to live and love fully.

Everlove by Maggie Butt is published by The London Magazine, and available here: www.thelondonmagazine