Andrew McDonnell reviews ‘Fresh Out of The Sky’ by George Szirtes 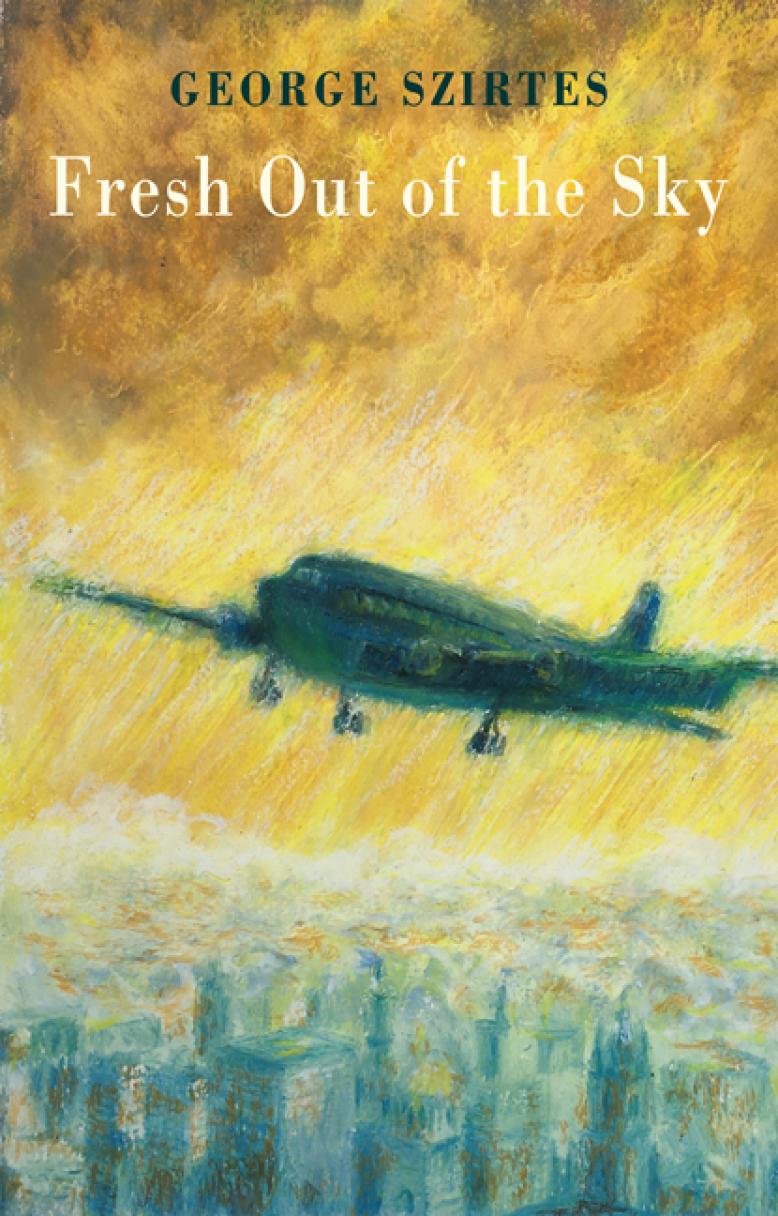 Mary Borden, in her forward to her WW1 modernist memoir of prose poems, The Forbidden Zone, writes how her pieces are fragments of ‘a great confusion’. The poems that make up a great part of Szirtes new collection are themselves fragments of a great confusion that the 20th Century was so good at creating. For Szirtes in particular, it is the Hungarian uprising and his family’s flight to the UK, as echoed here metaphorically by both the title of the collection and by the artwork of Clarissa Upchurch of a plane coming into land. Of course, the poems here speak beyond their own historical moment to any family fleeing danger and seeking a new life. His experience has been repeating and repeating, day after day on the news and on the beaches of Europe and I found myself thinking of both Szirtes earlier poem ‘My Father Carries me Across a Field’, and our chief demagogue, Farage, pompously standing on the white cliffs of Dover blowing his dog whistle into the wind and getting hit with it in the back of the head.

What is the legacy of the 20th Century for Europe? This is a question that we are continually asking, attempting to feel our way around the horrors of the Nazis; the Cold War; the constant face of antisemitism and other forms of prejudice pushing their face over the garden wall of our culture; the upheaval of people, of families who find home amongst the ‘bleak terraces’ and watchful eyes of the neighbours who ‘can’t keep track of all their comings and goings’ (Meet the Neighbours). We rise to meet ourselves in these poems.

With each collection, the past is redrawn through a mastery of form that we come to expect from this poet, (Szirtes is surely our contemporary master of both the terza-rima and sonnet crown). These formal poems lead us to surprising imagery, where a youth puts out his cigarette ‘on a woman’s shapely thigh’, or the command to not be fearful of how trains in the UK ‘divide and where they go’. Trauma and history dance at the edges of these poems to Al Johnson; arguments through floorboards; phone calls and a ‘landlord’s dog’. It captures an England of coldness and indifference and the strangeness and the stranger. The adult remembering the child’s experience and trying to puzzle it out.

However, that great confusion doesn’t just belong to the 20th Century. This collection also points towards our own great confusion: our plague times, our weak world leaders and their gerrymandering, the tensions between nationalism and globalisation. It is a serious book and a book which deserves wider reading and discussion.

The collection is divided into five distinct segments. The second segment is a dialogue between the poet and his late father. This section haunted me for days and each re-reading offered new questions and ways of seeing. The success lies in its form, which works to create an oppositional writing that challenges the way in which identity is ascribed, both in the larger sense and in the personal. At times the poem works on metered stanzas before suddenly fracturing into lines that move across the white space like exhaled smoke or fog. The unnatural narrative of the poem (who exactly is speaking when the poem shows us that absolutes are the path to disaster?) resists and the resistance is powerful. In the first part, ‘Waking in the Yellow Room’, the speaker tells us to resist not just those who would seek to assign us, but to also resist self-assignation.  In ‘Ring Circuit and Stalemate’, the middle section reads:

No point arguing with their dead, still less so
With yourself. All one makes of that is poetry,
Which is no consolation. We are at a standstill
You and I.

I see you playing cards
In a garden with your friends, a cigarette

In your mouth. You offer me a cigarette.
You show me a handful of foreign cards.
You explain the rules. You sit so very still
It is as though you were composing poetry
In your head but you will not say so.

The subtle shift in tense from present to past in the penultimate line adds to the dreamlike quality of the poem. Nothing is what it seems, and knowing is frustratingly beyond the son, and yet that frustration is a better state than those who sit in ‘The Yellow Room’ certain of their own self-definition. Through this unnatural dialogue, resistance is shaped in new and surprising ways. It is also deeply moving.

The collection accumulates more and more dreamlike power. The section Going Viral plays with the language of Covid and the war metaphors poorly employed by the government are nicely skewered here. The poems are infused with a deep scepticism for the language of emergency, the hyperbole of the Ministries, asking how we are supposed to find the space to live in the seas of anxiety while corruption openly happens before us. These poems also complement the earlier poems in their sense of history repeating:

Nobody had died
It was there in the records
That we had not died.

In recent years, who has not pinched themselves and asked, ‘am I dreaming?’ From Trump’s chaotic made-it-up-on-the-back-of-a-fag-packet administration to our own current incumbent mess of a PM, never has it felt like we are in a waking dream where truth is sold down the river to the highest bidder and then drowned.

In the fourth segment, we enter dream songs with quatrains and sonnets rushing forward through hypnogogic logic and riddles. The speaker of the poems finds themselves waking into nightmares where things have been stolen, trains are late, trouble is coming, ghosts walk town and tunnels, and the speaker wakes up dead to another version of themselves on tv ‘with a name I could not speak’. These poems circle us back through earlier sections, fracturing the logic further, taking us into surreal territories. They are compelling and rather than being a nod to Berryman’s dream songs, these remind me a lot of mid-century European poetry, from that of Holub, Holan etc, to the matter-of-fact surrealness of Francis Ponge (The CB Editions Ponge is worth consulting) and of course, Kafka. Szirtes has a knack for making his voice sound utterly calm and logical in this regard ‘Fake news said the light in my brain. / Trust me, it’s fake, it repeated’ (Dream of Moldova).

The collection ends on a different note with Bestiary, a playful series of poems that combine addictive doggerel with prose poems and bought to mind Borges’s Book of Imaginary Beasts and somewhat randomly Shel Silverstein who I often read to my kids at bedtime. My favourite here is the Stag Beetle:

Horned demon, stag beetle,
Half-insect, half Swiss-army-knife,
Your armour seems impregnable.
Have you come to take my life?

The shift in tone between the quatrain and the prose poem is what make this bestiary a pleasure to the ear. I recently finished Russell Hoban’s 1981 speculative novel Riddley Walker, and the quatrains here reminded me of the songs and poems the characters sing as didactic lessons about the world, creating their own mythology and wariness. There’s a real pleasure in these closing poems that left me wanting a full bestiary with sketches of the beasts.

I took some time away from the collection after writing the first part of this review to reflect on what I had read. One of the problems of writing a review about poetry is that poetry is not immediate, not instantly consumable (Actually, problem is the wrong word here – not being instantly consumable in the age of Instapoetry is welcome). Poetry needs time to work through to the core and the poetry of Szirtes is rewarding when you give it the space. The Yellow Room section of the book has stayed with me the most – I read out a section to my partner, about resisting being assigned identity by others but also oneself, and how that resonated in terms of a conversation we were having about class and intersectionality.

The world has irrevocably changed and the poems in this book speak to this contemporary moment. The poems recreate the dreamlike reality we find ourselves walking through. These poems are generous, personable but come with warnings. Szirtes is listening carefully to the world that is in a fugue state, walking randomly from disaster to disaster, often unable to link history to these moments, and beneath that fugue, we find ourselves, and the hope and promise in the circumstance that so many of us have heads.

Fresh Out of the Sky (2021) by George Szirtes is published by Bloodaxe Books and available here:www.bloodaxebooks.com