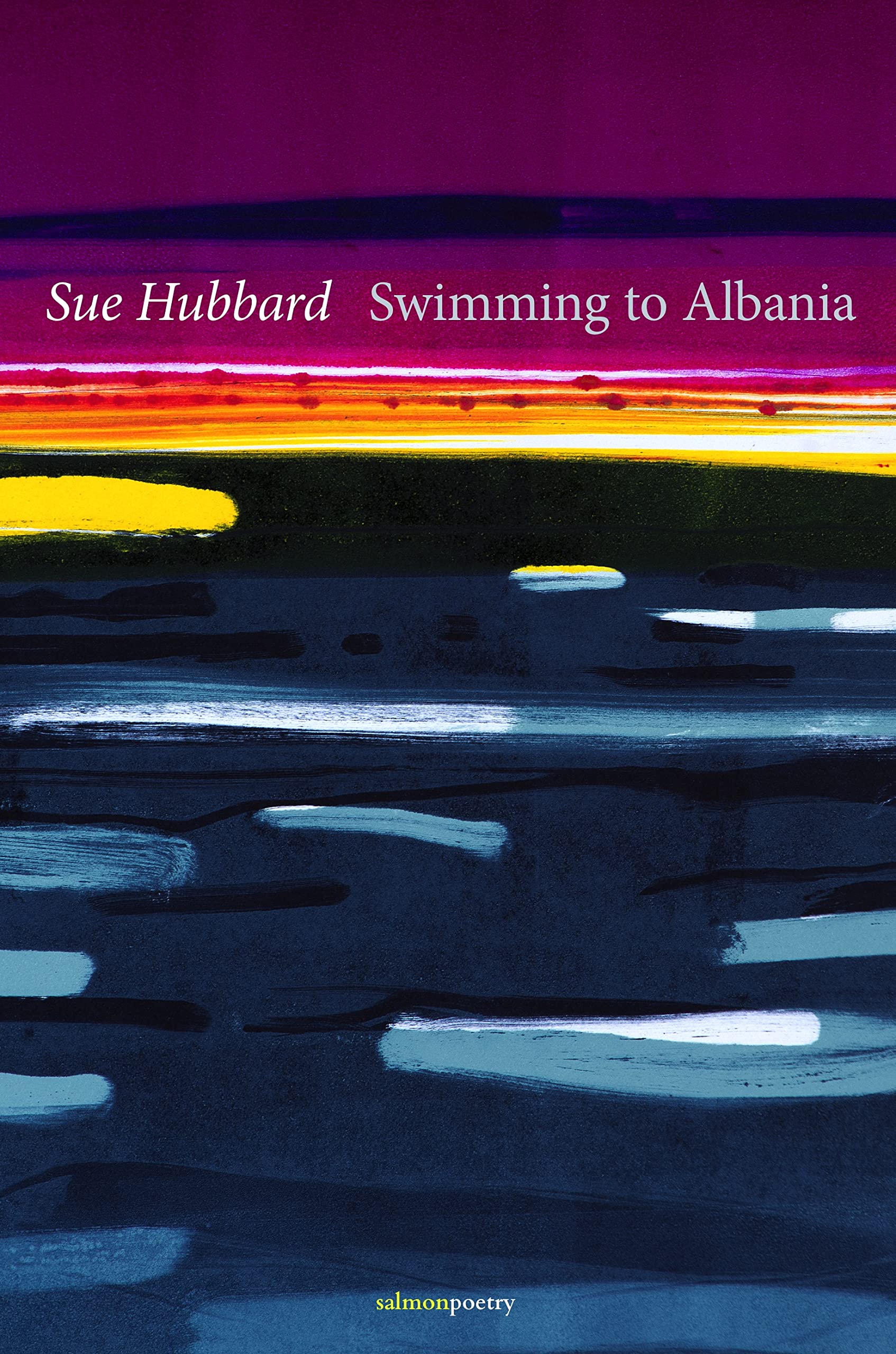 On reading Sue Hubbard’s collection Swimming to Albania, the concept that comes to mind is saudade. A. F. G. Bell writes in his study In Portugal, published in 1912:‘The famous saudade of the Portuguese is a vague and constant desire for something that does not and probably cannot exist, for something other than the present, a turning towards the past or towards the future.’

Indeed, we may feel a stronger form of saudade towards people and things we have lost: old habits and sayings;  lost lovers; a faraway place where we grew up; loved ones who have died;  and  faded, though treasured memories of youth. Although it relates to feelings of melancholy and fond memories of what we have lost, it can also be characterised by a sadness coupled with a paradoxical joy emerging from the acceptance of fate and the hope of recovering or replacing what is lost.

In  Sue Hubbard’s  collection Swimming to Albania, we encounter this longing. The first poem, ‘Lost in Space,’ evokes this vividly with the image of the poet’s childhood room:

Somewhere amid black holes
and the absorption of light
beyond the mass of Milky Way
there’s a distant room:
the walls covered with faded flowers,
a meadow of flecked sunlight,
where a child lies beneath
a bleached quilt in a narrow bed
dreaming of a boat
with a single blue sail,
a boat that will take her home.

In ‘1955, perhaps’, Hubbard offers an image of herself and her sister as children feeding the ducks in a London park.  In compiling a collection the order in which poems are placed is crucial.  This evocation of longing for a lost past is powerfully followed by  ‘June,’ which begins with memories evoked by a photograph of her and her sister on the Côte d’Azur:

You stand in your scuffed Box Brownie square,
pretty and slim in your summer shorts,
your Hedy Lamarr hair, in front of a stage-left
parasol somewhere on the Côte d’Azur

But then this saudade for a lost past turns into a far darker longing for a lost sister:

Years later as you lie trying to catch
your shallow breath in the summer heat,
the same month as your name,
the same month as your birth,
I sit beside your cot holding
your frail hand in mine—
like a child in danger of getting lost—
wanting to tell you: this is who I am,
this has been the story,
that there are no drafts,
no proofs to be corrected,
that we don’t get to write it again.

In ‘Churchyard,’ Sue Hubbard evokes another bereavement, describing the wonderfully surreal moment at which the local vicar empties the poet’s father’s ashes into a newly dug hole in the earth:

It’s the plastic Evian bottle
that throws me, with which
she rinses the caddy,
swirling round the water
to make sure she has every
last speck, every particle
of ash that was you.

The following section of the collection describes a different sort of saudade, a powerful mourning for lost love or lost youth.  In ‘another side of desire’, the poet evokes the nostalgia of remembered passion:

in contrast to the loss of small things
the conspiracy of 2
that sets the world on fire
the urgency of that midnight kiss
the tangled sheets of desire
those loves that do not appear
the  l  o  n  g  i  n  g
for what might have been
in a space without gravity
there’s no weight
so I listen for the skylark
singing in the high wild blue.

In ‘face,’ the poet offers the reader an unflinching and relentless perspective on lost youth:

Critic Martyn Crucifix has made the very perspicacious observation that in Hubbard’s poems one encounters rage against loss, along with the paradoxical desire to recover at least a measure of order and redemption.  He adds, ‘…in the act of each poem’s creation, Hubbard triumphantly snatches positive value from the very precision and courage with which she renders disillusionment.’

This is particularly evident in the poems in the third section, in which we encounter the image of the poetic subject as woman travelling alone in foreign climes, far from familiar scenarios and terms of reference.  In the page introducing this third section, Hubbard inserts a quotation from Henry David Thoreau: ‘…not until we have lost the world do we find ourselves, and realise where we are.’  In ‘Lost’, as she wanders through the streets of Siena,

‘…desire fills the empty spaces.  There’s nowhere
to get to anymore, so in arm with what might have been,

you make your passegiata, past courtyards and shuttered windows,
with no way of knowing which direction points home.’

In the down-at-heel Portuguese town of Barreiro, the poet experiences a certain saudade for past beauty:

‘Villages die. Towns die.  History
is never satisfied.  And the similarity
between decay and earthquakes?

The beauty of ruins.’

But paradoxically, it is in solitude that we are able to find or construct our most real selves.  As Hubbard points out in ‘Travelling Alone,’

‘How did I get from there to here?
What route lead me in search
of a heart to call my own?
(…) Voices I don’t understand blow in
through the open window.
I pick up my pen and begin to write
unpacking these words to discover
what I’ve become.’

In the words of Fernando Pessoa, the poet of saudade,  ‘tudo vale a pena/quando a alma não é pequena,’ roughly translated, ‘All is worthwhile when the soul is not small.’ Sue Hubbard’s Swimming to Albania is an extraordinary achievement of poetic craft, forging a self characterised by depth of soul, unflinching courage, and literary sensibility.