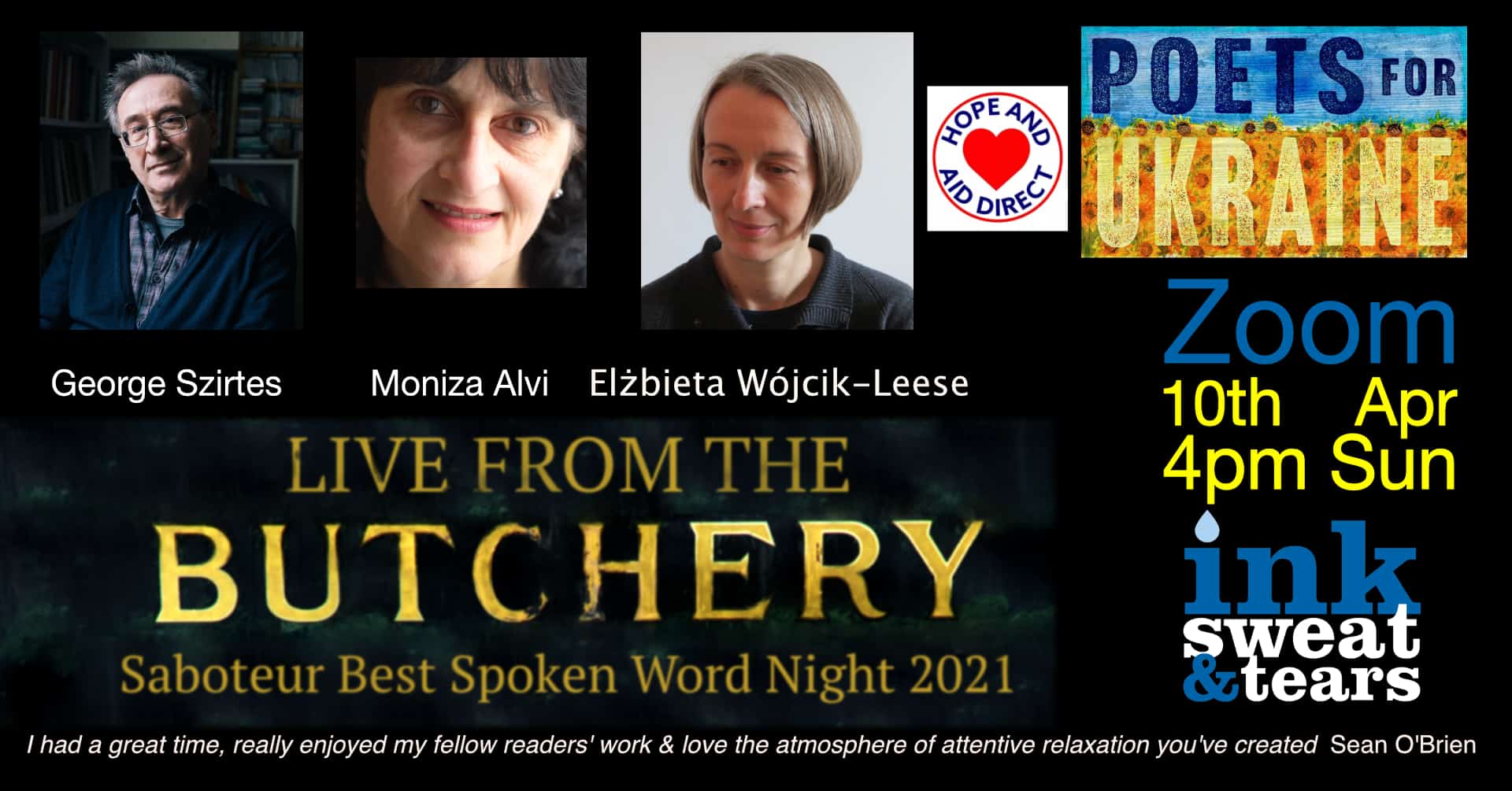 Please join us on zoom for live readings from George Szirtes, Moniza Alvi and Elżbieta Wójcik-Leese

We will be operating on a ‘donate what you can, if you can, basis’, and all proceeds will go to the Poetry for Ukraine chosen charity, Hope and Aid Direct: https://www.hopeandaiddirect.org.uk/
Please register in advance, with Eventbrite here: https://bit.ly/3J5SCgg

George Szirtes’s twelfth book of poems, Reel (2004) won the T S Eliot Prize for which he has been twice shortlisted since. His latest is Fresh Out of the Sky. (2021). His memoir The Photographer at Sixteen (2019) was awarded the James Tait Black Prize in 2020. He is a Fellow of the Royal Society of Literature, a co-winner of the International Booker translator’s prize, with his own books in various languages including Italian, German, Chinese and Hungarian as well as individual poems in many others. His international prizes include the Déry Prize in Hungary, the People and Poetry Prize in China, and the Bess Hokin Prize in the USA.  He has also written for children, radio, stage and texts for music.

For an hour or two God lay down
in the shade of a wide-canopied tree.

‘Wake up!’ laughed the Devil who
always had to keep track of him.
‘You don’t have time to sleep!’

Moniza Alvi was born in Lahore to an English mother and a Pakistani father. She  grew up in Hertfordshire. Her first collection The Country at My Shoulder (Oxford University Press, 1993) was shortlisted for the T.S. Eliot and the Whitbread poetry prizes. Europa (Bloodaxe, 2008) and At the Time of Partition (Bloodaxe, 2013) were also shortlisted for the T.S. Eliot Prize. Fairoz is published this spring. After a long career as a teacher in a London comprehensive school, Moniza now lives in Norfolk where she is completing a PhD at UEA on the poetry of Stevie Smith.

If this high-arctic heath could moult,
every July its dwarf-shrub body

would shed its bruises and trace the coast
in white, brown and black: the moult

they keep close to the sea or early thawing lakes
and gobble sedge shoots and tufts of cotton grass.

on the downstroke and feel their primaries
rotate on the upstroke reducing air resistance,

wingtip vortices and drag on their long
migration south to the British Isles,

vocalized in high-pitched echelons of wink-wink
with rows of prolonged ahng-ahng-ahng.

of this tundra lowland. For over a decade now,
after a camping trailer traversed the waterlogged

fellfields and snowbeds in a seismic survey,
these ruts have eased in thermokarst,

the pulse disturbance to the permafrost.
This ice-rich soil is melting: the tracks bulge

into hummocks and dip into marshy hollows,
ready to morph again and again. In winters,

[An earlier version of this poem was published in The Island Review.]

Elżbieta Wójcik-Leese writes with/in English, Polish and Danish. Her multilingual texts have appeared in, among others, Wretched Strangers: Borders, Movement, Homes; Other Countries: Contemporary Poets Rewiring History; Metropoetica. Poetry and Urban Space: Women Writing Cities and such journals as Finished Creatures, Long Poem Magazine, Poetry Salzburg Review, Shearsman and Tears in the Fence. Her selection from Marcin Świetlicki, Night Truck Driver, finalist for the Big Other Book Award for Translation, was longlisted for the 2021 PEN for Poetry in Translation. She co-curates and runs ‘Transreading’ courses on translocal and hybrid poetries for the Poetry School. She lives in Copenhagen.