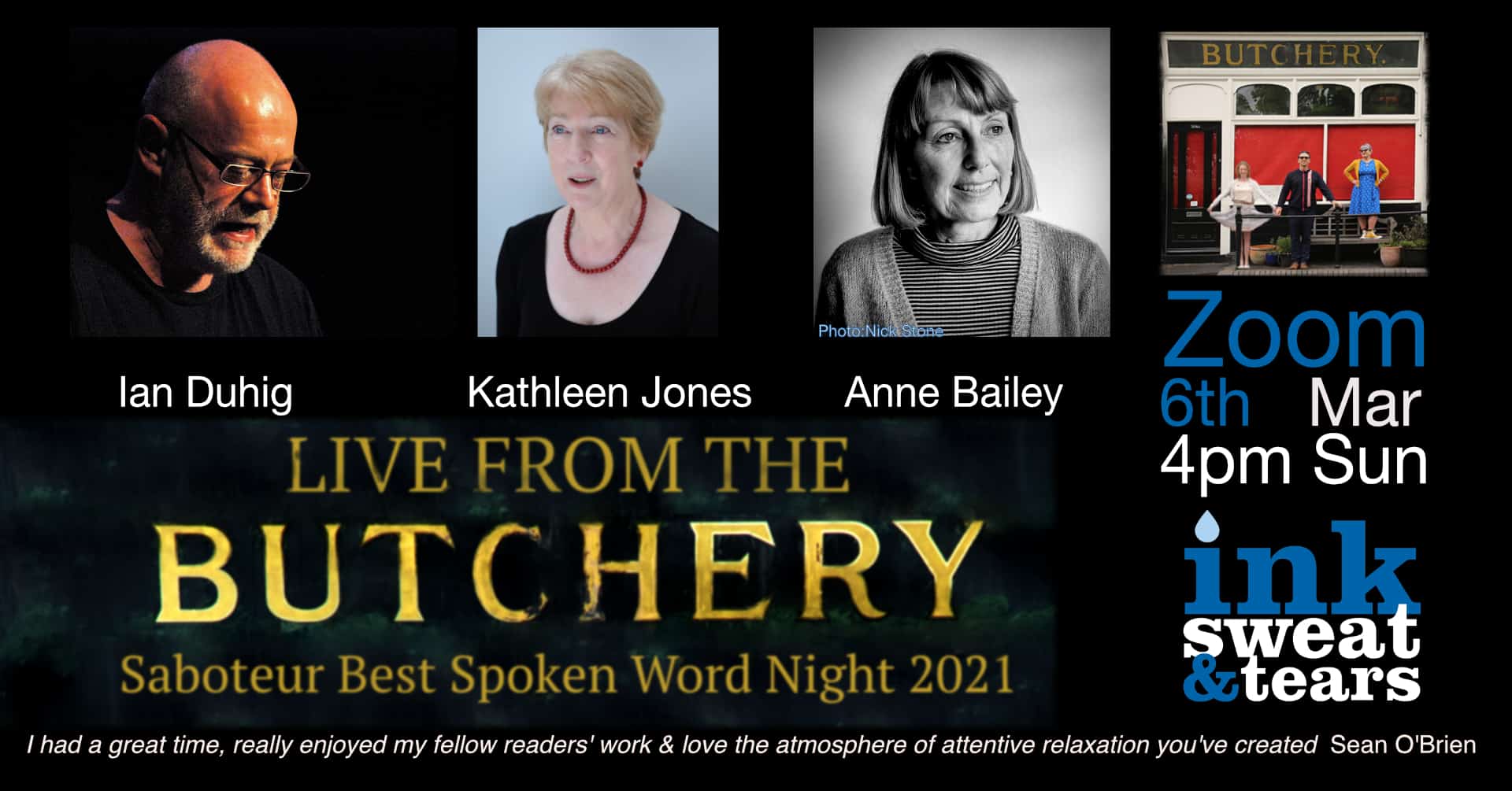 Please join us on zoom for live readings from Ian Duhig, Kathleen Jones and Anne Bailey on Sunday 6th March at 4pm UTC

The event will be on zoom. Please register here: https://bit.ly/3v2amFH

Builder without cards, sweet-voiced sharp dealer,
‘Carrickfergus’ Bernard I’d heard him called first,
though not born Bernard, or from Carrickfergus,
but a refugee from pogroms in sixties West Belfast.

Here, relabelled bipolar, his house of no cards fell:
he couldn’t leave his civil war as easily as names:
too long the handsome boatman under bare poles,
he needn’t tap the glass to know about the storms.

l remember him fixing our front room windows,
shuffling decks of glass, from struts taking panes.
I remember how utterly cold invaded my home
until he made it just a picture in its frame again.

Former homelessness worker, Ian Duhig still works with socially excluded groups and campaigning organisations such as the David Oluwale Memorial Association as well as film makers, artists, sculptors and musicians ranging from the Clerks, a pre-Baroque vocal consort to new Australian art-rock supergroup Springtime as well as writing essays and reviews for the Irish Times. Duhig has won the Forward Best Poem Prize once, the National Poetry Competition twice and been shortlisted for the TS Eliot Prize four times. His New and Selected Poems was a Poetry Book Society Special Commendation, an Irish Times Poetry Book of the Year, a Guardian Poetry Book of the Year and an Observer Book of the Year for 2021. More here: https://poetryarchive.org/poet/ian-duhig/

This is my pitch – ten Anglo-Saxon poles –
in which I practise the art of double-digging
feeling the smooth slice of the spade’s travel
through the reluctant loam.

I have left the abandoned parsnips
to feather and flower a foot above my head
as my spade amputates forgotten beetroot
and potatoes, part of last year’s glut.

Grandpa kept a bucket in his shed
to piss in. Well-matured, it fertilised
the celery and rhubarb. Nothing so personal here –
just bone meal and chicken shit
and a compost heap swarming with ants.

My neighbour’s strip has cabbages
centred with stick and string, and straight rows
of onions standing to attention as if shocked,
as he is, by such disorderly abundance.

But in the dusk, in the rain, crouching
to weed the seedling salad patch
my fingers brown and swollen
with nettle stings, I realise that this
is where I was always meant to be –

replicating the actions of Viking wives
crouched in their small garths, beside fjords,
and all those other northern women, after the ice,
bedding down in caves and turf-roofed crannogs

Kathleen Jones is a poet and biographer living in the Lake District where she was born and brought up on a remote hill farm. She spent over a decade living in Africa and the Middle East, where she worked in broadcast media. Her first collection, Not Saying Goodbye at Gate 21, was a winner of the Straid Award and published by Templar Poetry. Her second collection, The Rainmaker’s Wife, was published by Indigo Dreams and she has two pamphlets, Unwritten Lives (Redbeck Press) and Mapping Emily, (Templar). She has also written nine biographies and three novels and is a Royal Literary Fund Fellow working in universities and with community groups. Website: http://www.kathleenjones.co.uk

When the lake came

it occupied a space in the living room between the sofa and the fireplace.

It kept very still, made no demands,
showed a perfect reflection of the lamp on the table.

It was an inconvenience
we had to stop the children from jumping in.

Eventually they understood: We walk round it, avoid staring, get on with our lives.

I think of it as deep and cold;
there are hints of a breeze but no smell.

It has a magnetic pull.
We lean towards it as we pass,

shoot a glance in its direction hoping no one else notices.

Is it getting bigger? Is it awake?
Is that a breeze, a whiff of something?

What would happen if we leaned over and looked right in?

Anne Bailey is a Yorkshire woman now living and writing poems in North Norfolk. She has had her work published in Ink Sweat and Tears, Brittle Star, Obsessed with Pipework, Lighthouse, The Moth, and Under the Radar. She is a committee member for Cafe Writers organising live poetry events in Norwich. She was commended in the Ambit 2021 Poetry Competition and her first pamphlet What the House Taught Us was published in winter 2021 by Emma Press.