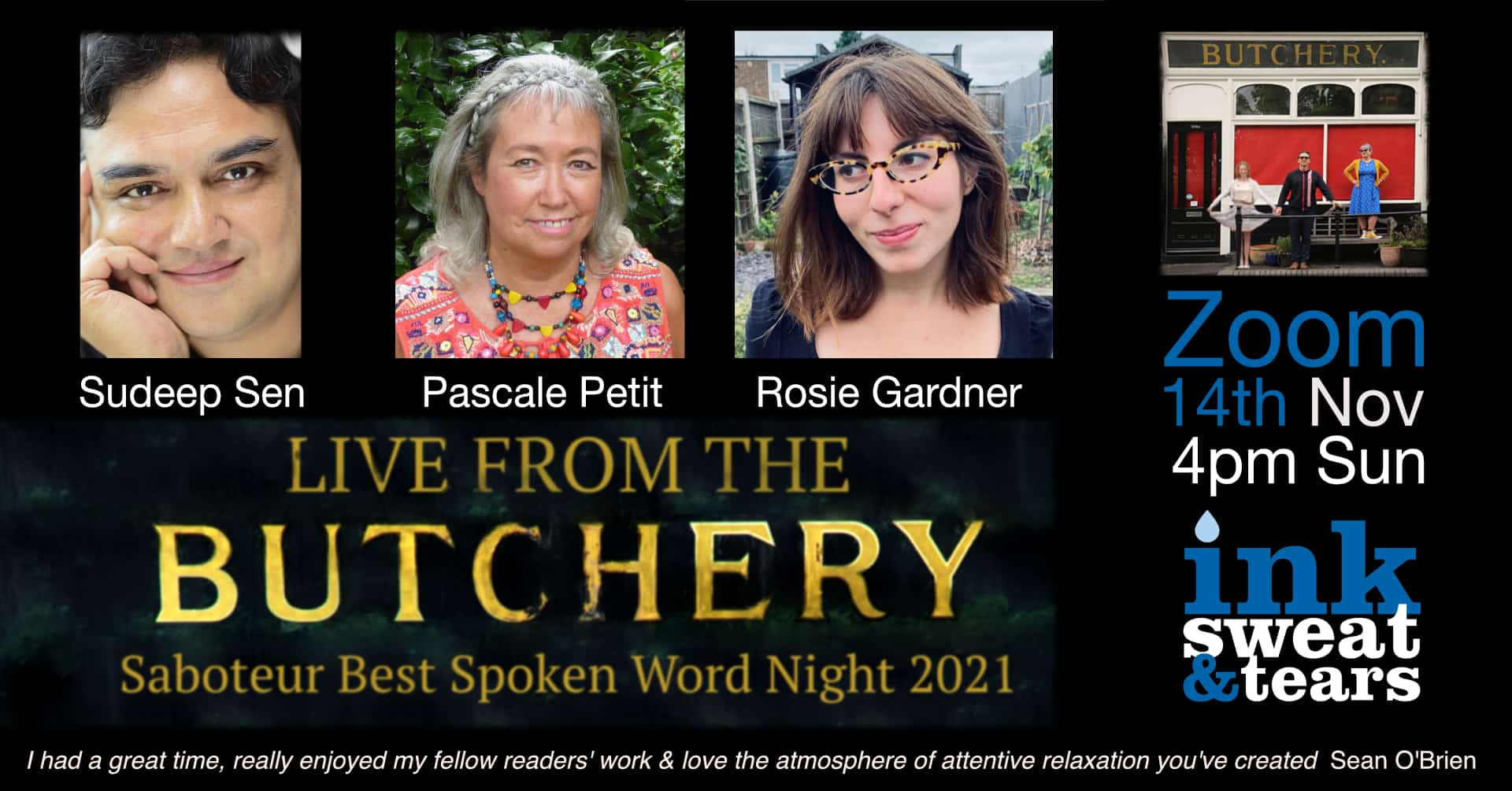 Please join us on zoom for live readings from Pascale Petit, Sudeep Sen and Rosie Gardner on Sunday 14th November at 4pm BST.

The day will come when papers
will only tell leaf-stories
of blackbirds’ quarrels with sparrows.

Their pages will roll back into trees
and the front page will be bark.

to text me secrets from the soil
adding emojis
of all our lost species.

I’ll be surrounded by phones
that light up with chlorophyll,
vibrating like workers in their hives –

an apiary of apps.

everyone will hold leaves
intently as smartphones

to hear them retweet birdsong
from archives.

This is my homepage, where I belong.
This is my wood wide web,

my contour map
with which to navigate
a new internet –

Underground
where resistance is in progress –

fungal friends working in darkness,
their windows blacked out.

Pascale Petit’s eighth collection, Tiger Girl (Bloodaxe Books, 2020), was shortlisted for the Forward Prize and for Wales Book of the Year. Her previous collection, Mama Amazonica (Bloodaxe Books, 2017), won the inaugural Laurel Prize 2020 and the RSL Ondaatje Prize 2018. Four of her collections were shortlisted for the T.S. Eliot Prize.
This poem is taken from Tiger Girl. You can order Tiger Girl here: https://www.bloodaxebooks.com/ecs/product/tiger-girl-1243

My body carved from abandoned bricks of a ruined temple,
from minaret-shards of an old mosque,
from slate-remnants of a medieval church apse,
from soil tilled by my ancestors.

My bones don’t fit together correctly                as they should —
the searing ultra-violet light from Aurora Borealis
patches and etch-corrects my orientation —
magnetic pulses prove potent.

My flesh sculpted from fruits of the tropics,
blood from coconut water,
skin coloured by brown bark of Indian teak.

White light everywhere,
but no one can recognize its hue,
no one knows that there is colour in it —          all possible colours.

Body worshipped, not for its blessing,
but its contour —
artificial shape shaped by Nautilus.
Skin moistened by L’Oreal
and not by season’s first rains —
skeleton’s strength not shaped by earthquakes
or slow-moulded by fearless forest-fires.

no gps, no pole-star navigation,            no fossil fuel to burn away —
just maps with empty grids and names of places that might exist.

Sudeep Sen’s prize-winning books include: Postmarked India: New & Selected Poems (HarperCollins), Rain, Aria (A. K. Ramanujan Translation Award), Fractals: New & Selected Poems | Translations 1980-2015 and Anthropocene: Climate Change, Contagion, Consolation (Pippa Rann). He has edited influential anthologies, including: The HarperCollins Book of English Poetry, World English Poetry, and Modern English Poetry by Younger Indians (Sahitya Akademi).  Sen’s works have been translated into over 25 languages. His newer work appears in New Writing 15 (Granta), Language for a New Century (Norton), Leela: An Erotic Play of Verse and Art (Collins), Indian Love Poems (Knopf/Random House/Everyman), Out of Bounds (Bloodaxe), Initiate: Oxford New Writing (Blackwell), and Name me a Word (Yale). He is the editorial director of AARK ARTS, editor of Atlas, and currently the inaugural artist-in-residence at the Museo Camera. Sen is the first Asian honoured to deliver the Derek Walcott Lecture and read at the Nobel Laureate Festival. The Government of India awarded him the senior fellowship for “outstanding persons in the field of culture/literature.”
This poem is taken from Anthropocene: Climate Change, Contagion, Consolation, which you can order here: pipparannbooks.com

No day can be void of
Mystery when you were once
A child. He tells me
This.

I wake in disbelief to a
Familiar hell: the green
Quilt, flat white sky, maggots
Continuing inside my eyes.

I shut them again and burrow
My fists into the sockets,
Like I used to do
At family parties.

With eyes of their
Own, multiple and
Chlorinated, flanked with
Liquid mercury. There she is:

She’s curled on auntie’s couch
In a pink dress, like a
Female maladjustment, like a
Little pink shrimp.

With smaller fists
Pressed into a smaller head,
Her black gives way to
Chlorinated angels flanked

With multiple green quilts. She
Knows the curl of
Time and self just as I do, for she
Is all I’ll ever be.

I sit with her a while
Before getting up.

Rosie Gardner is a poet. She was raised in Great Yarmouth, Norfolk, where amongst the wind-beaten coast, novelty rock candy shops, and infamously atrocious wax museum, she developed an awareness for the world’s natural sense of humour. Poetry soon arrived to keep her company. Her current work is centered on the relationship between organic and digital forms of experience, the impact of memory and subjectivity on the perception of the present, as well as health, art, and the magic of inner life. She is currently on the MA Poetry program at the University of East Anglia and is the 2021 Ink Sweat & Tears Scholar