Our Submissions for the 2022 Forward Prize for Best Single Poem

We submitted our three nominations for 2022’s Forward Prize Best Single Poem last week and what better day to announce these on than World Poetry Day. Please join us in congratulating Celestine Stilwell, Elizabeth Sennitt Clough and L Kiew and revisit their poems below. We wish them the very best of luck.

As an added bonus we are (or soon will be) featuring audio recordings of their submitted poems by the poets themselves.

My brother used to burn ants with a magnifying glass.
I blamed the sun for tempting his half-talking, grazed
knees to kneel on hot tarmac. He’d run his
pink-licked fingers through the slab’s trenches, collecting
worm eggs beneath thumb-nails.
Once they were out and open,
a four-year-old angles the sun.

On hot days like this, his thin skin would
glaze like baked egg-wash. Big hands to bathe scabbed knees
in holy water, and he’d dream that the ants’ bodies
were washed back to trenches by mourning.

Celestine Stilwell (he/they) is a transgender poet and visual artist based in Durham, who has previously won the Langaland Spoken Word Competition 2019, and the John Gurney Creative Writing Award 2019.

everyone’s version of heaven is different

Elisabeth Sennitt Clough is the author of Glass (Saboteur Best Pamphlet Award), Sightings (Michael Schmidt Award), At or Below Sea Level (PBS Recommendation) and ‘The Cold Store’, forthcoming 2021. Her poems appear in The Forward Book of Poetry 2018, The Rialto, Poem, Mslexia, Wasafiri, Magma, The Cannon’s Mouth and Stand among others. Elisabeth is editor of the Fenland Poetry Journal. @FenlandJ. www.elisabethsennittclough.co.uk @LizSennitt 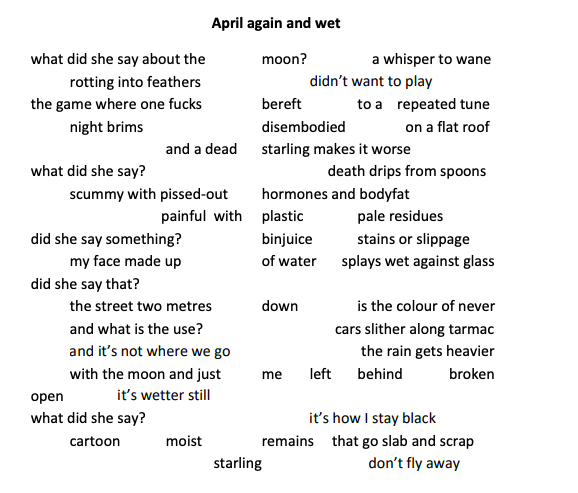 L Kiew is a Chinese-Malaysian based in London, and works as a charity sector leader and accountant. Her debut pamphlet The Unquiet was published by Offord Road Books (2019). She was a 2019/2020 London Library Emerging Writer.