It’s the way the dark between stars is filled with light
that may never reach us.

It’s the way our local Running Man is accompanied
by his imaginary friend who keeps up a lively conversation.

It’s the way my one-year-old grandson looks at me sometimes,
as if he knows more than he will ever remember.

It’s the way a vivid dream can take me over, so that on waking
I must find a quiet place to stay within its landscape.

It’s the way a poem will sometimes write itself, leave me
wondering where it came from.

It’s the way, before rain, there’s a moment of silence
that shushes the world for the coming downpour.

It’s the way, after rain, my sense of smell is enhanced, and I get
to know the earth, cement, grass, in a more intimate manner.

It’s the way walking in a wood will heal, will slow
the rush of the body to its end.

It’s the way giraffes are silent creatures until left to the night,
when they will hum secretly to each other.

Mostly, it’s the way I don’t know what I’m missing,
but still am missing it.

Frank Dullaghan is an Irish poet living in the UK. His most recent collection is In the Coming of Winter, published by Cinnamon Press 2021. His work is widely published in journals, including in Cyphers, London Magazine, Poetry Wales, and Rattle.

Note: In 2015 a report was issued by a team at the University of Vienna who had gathered 947 hours over 8 years of giraffes humming at 3 European zoos. Previously, giraffe caretakes believed they were silent creatures

Déjà Vu   Once more I'm caught on the sly hook of your voice and hauled out gasping into a toxic world. Lifetimes billow and vanish like haunted clouds: I race through the woods, but your word-arrows find me; I soar overhead, you shoot me...

Doctrinal Shuffle In the nakedness of civic planning a few secular aims overwhelm whatever any god could have deemed the key components of human subsistence— none of us knew what was coming next, not being privy to the lofty paper-pushing that...

PHEW! WHAT A SCORCHER Headlines regurgitate last year’s “hottest since whenever” claims, two-page spreads bulked out with photos of lolly-guzzling toddlers, sun-worshippers already reddened and some TikTok wannabe in a string bikini. Meanwhile,...

One side of a conversation over breakfast The flowers, no they were petals, were suspended over my head. I think they were singing a quiet song to themselves. They were white, each one in its own space. They were stationary but fluttering. I was...

Imaginarium ‘I am a smiling woman’ Sylvia Plath, Lady Lazarus And it came to me that stones, trees and water live in a circle trace their souls stain the landscape, it’s a luxury you can lead your life without choosing and yet determined to leave...

Some Crows So little happens that I tell you everything twice. The crow, I swear, followed my eye behind the door, knew to leave me something delicate and silver. Another crow, a different one, I swear, took up with its beak some chant or other,...

Purblind & Font in the odds ‘n’ ends drawer one might find what one is looking for amongst the biros and string purblind spectacles you might find anything half-remembered by the mind’s claw lemon rind what the hell was that for? there must... 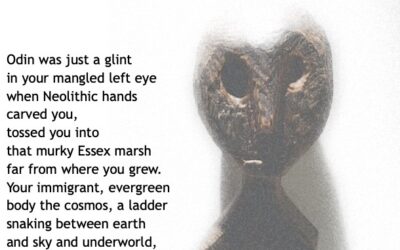 Jonathan Edis is a full-time dad, international lecturer & osteopath from Essex, living in south London. He’s in several poetry groups & is a rep for Forest Hill Stanza. This is his first published poem for ages.

Walking the Ring Road A sprig of hawthorn brushes away gritty city miles – back to gran banishing me and may blossom from the house – Smell of death. Smell of death. I’m running back to the trees clouding the field edge, burrowing up from the...